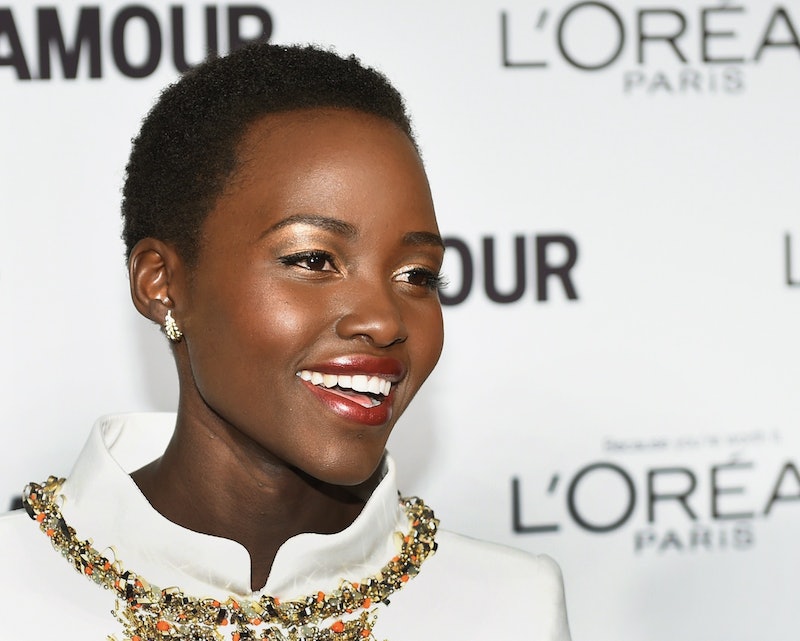 Does anyone need further confirmation that Orange is the New Black is truly one of the best shows ever? I really hope not, but this next bit of news might turn some OITNB non-believers into faithful viewers. As if I needed another reason to love her, Lupita Nyong'o says she's obsessed with OITNB , and suddenly all feels right with the world. What's even cooler is that OITNB star Taryn Manning wants Nyong'o to guest star on the Netflix series, so someone should make this happen ASAP.

During an interview with E! News, Manning appeared to be super enthusiastic about the prospect of Nyong'o landing a guest spot on the show, and has already mapped out a pretty interesting storyline proposal. "I would love to see her…if she wore one of her epic gowns as well," Manning said. "I think she's one of the best dressed."

Seeing as how someone had the audacity to steal Nyong'o's Oscars gown from her hotel room, Manning's glamorous gown-meets-jailhouse story line doesn't sound too far from reality. Even though it's hard to imagine Nyong'o donning an orange jumpsuit and being assigned a crazy nickname, I'm actually quite intrigued by the idea of seeing her bust the prison doors down while wearing one of her famous gowns.

Of course all of this is total speculation, but perhaps all of the buzz will help put some wheels into motion. Is it possible that the 12 Years a Slave actress managed to drop some hints while she snapped selfies with Uzo Aduba at the SAG Awards? Who knows guys, but if Nyong'o magically appears on season three in June, not only will it add to this list of reasons to love OITNB , I can almost guarantee that her appearance will cause yet another massive Internet breakdown.