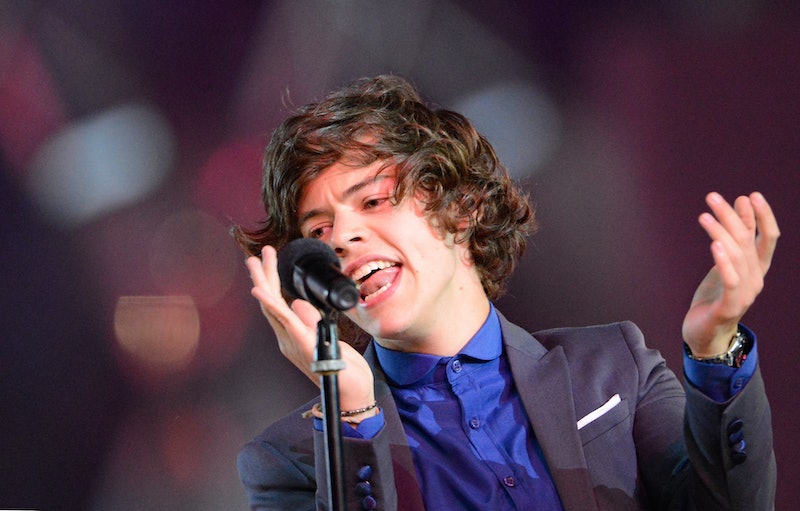 I had a fairly huge "A ha!" moment much more recently than I would like to admit. I was listening to Taylor Swift's new pop album 1989for the millionth time (because it's just that good, you guys) when I realized, oh my God — Swift's single "Style" is about Harry Styles. How could I have been so naive?! Sure, Swift's prone to writing about many of the boys that caused her strife, and ordinarily I'd assume the song could be about any number of them, but, uh... his name is right there in the title of the song. (Try not to judge me too hard, Swifties... I'm already ashamed.)

As any good Swift fan knows, "Style" is probably not the only song that the singer wrote about her one-time beau, whom Swift allegedly dated from November 2012 to January 2013. In fact, if the rumors are true, the One Direction boy bander actually has quite a repertoire of Swift songs that he can boast are about him... even if they're not all incredibly flattering. Here are the song that we can assume might be about the British pop star, because if you're going to date Swift, well, we're all going to hear about it eventually.

"I Knew You Were Trouble," Red

LYRICS: "I guess you didn't care, and I guess I liked that/And when I fell hard you took a step back/Without me"

Swift actually admitted that this tune was about her relationship with Styles in an interview with The Sunday Times. After performing the song at the BRIT Awards, which Styles attended, Swift said that it was easy to access the emotions of the tune "when the person the song is directed at is standing by the side of the stage watching." If you're wondering about the song's timeline, you're right to — the song was technically written before the pair ever started publicly dating. Still, if Swift didn't initially intend for the song to be about Styles, her performances of it apparently are directed towards the One Direction boy.

LYRICS: "People like you always want back the love they gave away/And people like me wanna believe you when you say you've changed"

Swift went into the recording studio just days after her breakup with Styles to lay down this track, which happens to be about a breakup. A little suspicious, no?

LYRICS: "Your necklace hanging from my neck/The night we couldn't quite forget/When we decided/To move the furniture so we could dance/Baby, like we stood a chance/Two paper airplanes flying, flying, flying"

There are two big clues from this song that indicate that it could be about Styles, and that's the references to the "necklace" hanging from Swift's neck and the "paper airplanes." The stars were spotted out wearing what seemed to be matching paper airplane necklace around the time that they were seeing each other. A time period which, outside of song, can be immortalized forever with this GIF.