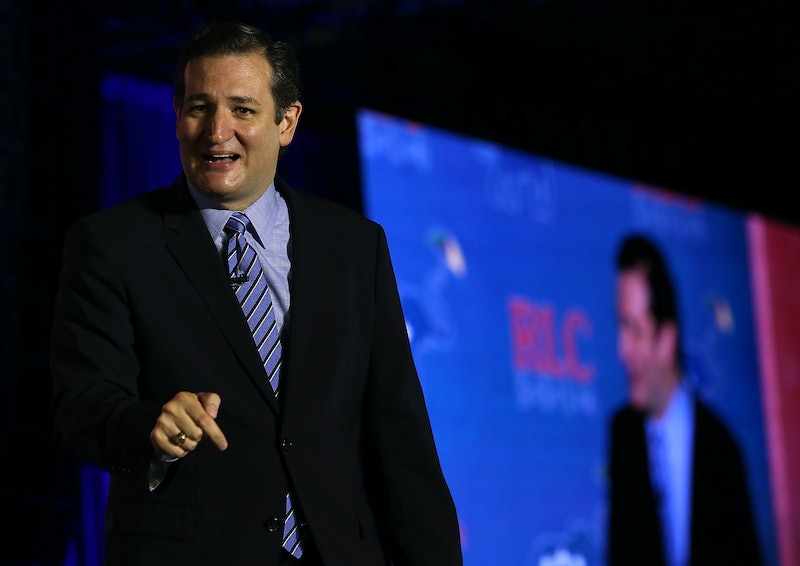 Ted Cruz loves a crowd, and if tonight is any indication, they clearly love him too. Speaking at the Conservative Political Action Conference in Maryland on Thursday, the Republican Texas senator played up his typical, impassioned televangelist routine to great acclaim. The highlight of the evening, of course, came after a lengthy diatribe against the powers in Washington, D.C. during which the senator reasoned that change in America could only come from its people. According to a report by The Daily Beast, Cruz then invited CPAC audience members to text him — or rather, his own fundraising committee — and to no one's surprise, many of them did.

It was a bizarre moment for the potential presidential hopeful, but it apparently appealed to CPAC attendees, who applauded and cheered him wildly. If Cruz proved anything with his speech on Thursday, it was his ineffable talent for making the most mundane and tired of axioms sound compelling.

Cruz used his time onstage to not only harpoon democrats, but also to blast fellow Republicans for their inability to "stand up" to liberal policy, calling them out as do-nothings who were more gloss than substance. Pacing the floor, he asked,

During a question-and-answer session hosted by Fox News host Sean Hannity directly following his address, Cruz also laundry listed his top five priorities upon becoming president, which included repealing "every blasted word of Obamacare", "abolish[ing] the IRS", stopping the "out of control regulators at the EPA", defending "our constitutional rights", and "restor[ing] America's leadership in the world as a shining city on a hill". The list read more like a declaration of general right-wing ideals than actual political objectives, but audience members didn't seem to mind.

It's a simple enough recipe. By mixing in a few dollops of "patriotism", quips about "Obamacare", and mentions of Reagan, Cruz easily delivered a generic but exciting speech, sprinkled with jabs at Hillary Clinton. Cruz insisted that by bringing together "women", "Hispanics", and "Reagan Democrats", America could once again be great. He promised, by a process of elimination, that he was the most conservative of the Conservatives. Speaking on President Obama's recent executive order, Cruz criticized, "Washington wants amnesty... the people want rule of law." To roaring applause, Cruz shouted, "Don't believe President Obama when he says, 'If you like your internet, you can keep your internet'," spurning the Federal Communications Commission's approval of net neutrality that same day.

What Cruz left out—the sweeping intricacies of immigration reform for over 12 million people or real concerns about internet deregulation— didn't matter. Cruz and his supporters weren't interested in introspection on issues that were truly plaguing the majority of the young, the working class, the financially burdened, or the non-white — they were looking for a zealous reminder of everything that Conservatives on the far end of the spectrum have come to love and for a change of pace for those who had grown weary of dodgy moderates, blandly diplomatic Nice-Guys, and another potential Bush White House.