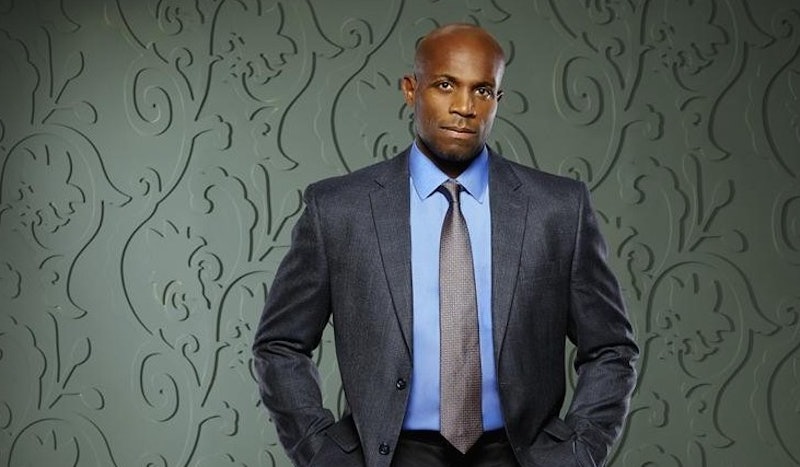 In tonight's season finale of How To Get Away With Murder, we didn't have to wait until the end of the episode for a cliffhanger. Annalise's ex-boyfriend Detective Nate Lahey was jumped on HTGAWM while lounging in his jail cell. This happened conspicuously after Annalise asked Frank if he still had connections at the prison. Is there anybody in Philadelphia that Frank doesn't know? The man is a hero in a suit vest.

Who jumped him? A prisoner that knows Frank from the outside? Pornstache from Orange Is The New Black? A ghost? All we found out from Bonnie was that it was "some guys." As it turns out, the guys who Frank and Annalise tasked with jumping him did not do their "job," exactly. The move was intended to get Nate out of jail. Instead, it got him put in solitary confinement. Which, as we know, is definitely not a fun place to be.

Then, like a shot, Nate was out of prison again and Annalise was begging him to call the number she provided and get a good lawyer. Here's what went down: Bonnie and Frank tricked Asher into making small talk with the judge presiding over Nate's case. They photographed it, texted it to the powers that be with not one, not two, but three question marks. The conflict of interest got that judge taken off of the case and the new judge sent Nate home. Simple as that.

In their next scene, Annalise explained her new plan to Nate. Earlier in the episode, she told the new prosecutor that Nate had followed her home on the night Sam was murdered and that the two men got into a physical altercation. It seemed at the time like Annalise was just grasping at straws — but don't fret! There is a reason for everything on How To Get Away With Murder and Nate had already figured out the plot. If he testified that he got into a fight with Sam, that would explain the fingerprints on the ring (that were actually left there by Frank) and the lack of further evidence would be enough to set Nate free.

At the end of the episode, Nate finally called the number. Did it belong to a new character that we'll meet in the fall, or someone we already know? What lawyer would Annalise Keating trust more than herself? The anticipation is killing me!