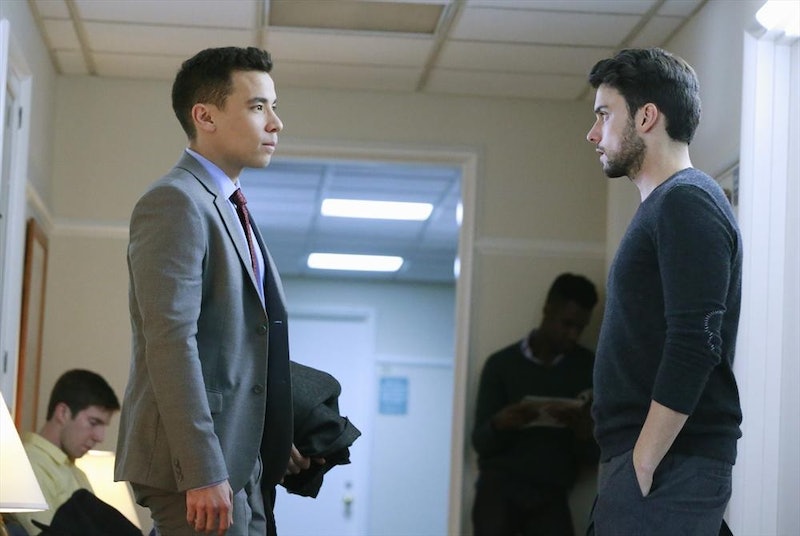 Hold the phone. After a very frank — and much needed — conversation about getting tested for STDs, we learn that Connor's boyfriend, Oliver, tested HIV-positive on How To Get Away With Murder . Didn't see that one coming, did you? No, seriously, did you? Because I definitely thought these two were in the clear. After a hectic day at the office for Connor — the usual holding someone captive, trying to solve a murder, maybe ordering Seamless, etc. — Connor comes home to hang with his bae, Oliver, who he finds curled up in a ball in bed, crying because Oliver has been diagnosed as HIV-positive.

It was kind of confusing at first — although the crying and the discussion about HIV earlier was kind of a hint — when Connor found Oliver because earlier in the episode Oliver had said he tested negative. Oliver, between sobs, says that he figured they'd talk about it in person because he thought Connor was going to be positive, too. Oliver explained that he assumed they'd be in it together. I get that Connor used to be this philandering playboy-like character, but come on Oliver, is now the time to say you thought your partner was going to be HIV-positive?

So what does this mean for the future of Coliver? Well, something tells me that this is going to be a major plot line for the couple during Season 2. My hope is that this doesn't change anything for Coliver, since I really think these two bring out the best in each other. But, Connor seemed seriously nervous about getting tested in the first place, so who knows what his take on Oliver's diagnosis will be.

Earlier in the episode, I commended the show for handling the topic of safe sex and getting tested with your partner with such candidness. It really shined a light on a topic that should be brought up between two sexual partners in a non-jokey way. Oliver's HIV-positive diagnosis will continue to allow the show to explore a frankness in conversations that need to happen on TV. So if anything, let's hope Coliver stays together, just so we can see how the show handles the news.

Catch up on Season 1 in this (drunk) recap below: