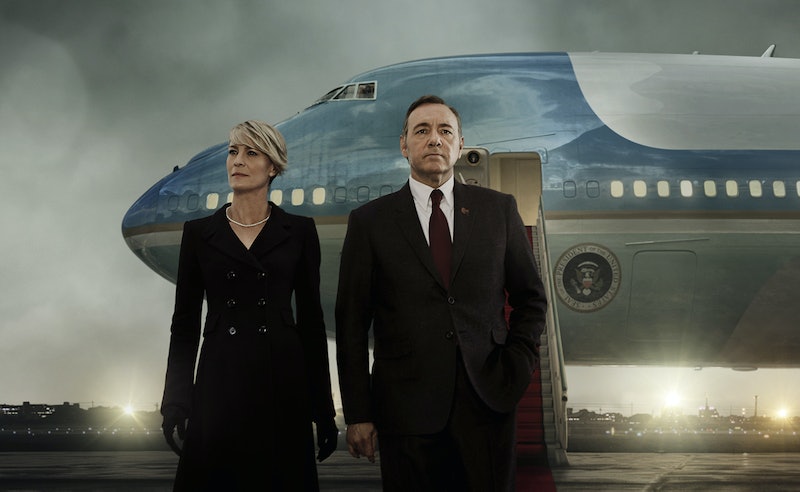 Every one of my friends who said I was insane for holding out hope that Doug is still alive on House of Cards can just read this season opener and weep, because Frank's trusty helper is, in fact, still kicking. And thank goodness for that. Look, Doug is no picnic. He's incredibly messed up and everything he did to Rachel was awful, selfish behavior to the max. But what's great about the fact that he didn't just die in the woods is that all the work the writers did on his character and the characters around him (*ahem, Rachel*) isn't just left in the woods now.

With Doug alive, though barely, the plot really, really thickens. We also get to see just how much his life depended on Frank, which is an interesting side of his character. Without being able to work for Frank — and what appears to be absolutely no contact from Doug's number one guy — the former go-to is crumbling. And while I generally don't root for people to experience the kind of slow emotional pain (and physical pain — holy hell, that scene in which Doug tapes up his own broken arm), it does seem like a fitting physical expression of Frank's supposedly shiny empire.

If Doug is alive, but withering away, what does that say about Frank's failing presidency — for which he has a lower approval rating than President Walker did when he stepped down?

While I'm sure I have a few friends who are absolutely pissed that Doug managed to survive that rock to the head, I offer this: Doug barely survived anything. He is a shell of a human. And this is exactly the sort of devastation we needed to see to prove that Frank's meteoric rise wasn't all successful scheming: there are consequences and the consequences look a lot like Doug's new pathetic existence.