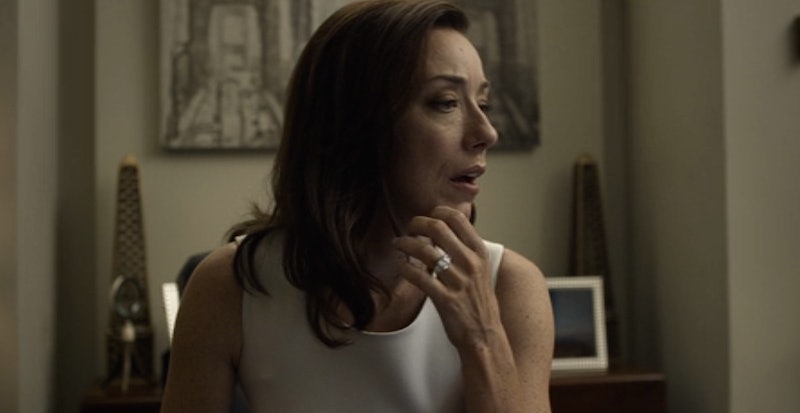 In a move that will surely devastate Remy & Jackie shippers everywhere, House of Cards political maven Jackie Sharp is engaged... to someone other than President Underwood's handsome Chief of Staff. Look, I'm happy for her (OK, not really, but only because Remy clearly wants her back), but marriage wasn't exactly the big game I hoping for in Jackie's Season 3 journey. And the bummer is that the really inspiring part of her story comes at a cost and that cost is, well, marriage.

Essentially, Jackie is seeking the vice presidency and maybe even the presidency (yes, this is a world in which two women are vying for spots in the White House) and Remy points out that the thing Heather Dunbar has over Jackie is that she's married with kids. Jackie proceeds to turn to her insta-boyfriend (seriously, where did he come from?) and tell him they should get married. There's no aura of desperation that might typically accompany a woman in pop culture asking her boyfriend to marry her. Jackie seems to be in full control of the situation, which is a really great way to play what's a rather ugly political reality.

Unfortunately, Remy is not wrong. It's simply much harder for a woman to run for any political office without being married or having a family. It's also hard for any politician to do so, but for a woman, Remy points out, the family thing is essential.

And when we look back at all the trouble Frank and Claire have faced thanks to Claire's decision to not have children, it seems that House of Cards is doubling down on the theme that until now, was rather subtle: The political pressure to have children is stiflingly heavy on women who want to succeed in politics. Jackie even quips that she's sort of cheating the system, because if she marries her boyfriend, "he comes with two kids."

It's awful that this is a reality and that a woman's political merit has little standing without a cookie-cutter background to go with it, but House of Cards' presentation of this issue could not have been executed more flawlessly.