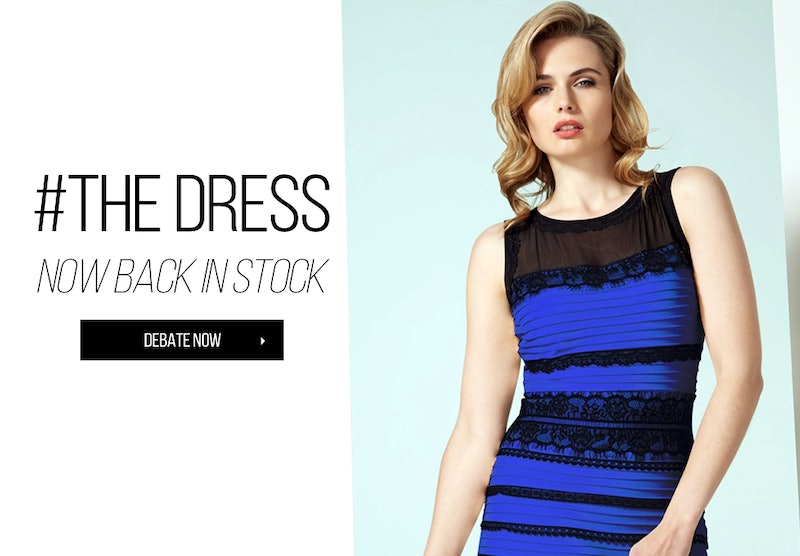 Sorry, folks, but it doesn't look like the mass hysteria surrounding #TheDress is going to die down anytime soon. Not only are people still freaking out, but companies are including #TheDress in marketing campaigns, totally taking advantage of the trending topic to promote their products. Since the now-infamous dress and question were posted on Tumblr Thursday night, the post has garnered almost 500,000 likes.

The entire Internet was in a collective shouting match over what color the dress is — many asserting, "White and gold! while others insisted, "Black and blue!" Numerous celebrities joined the heated debate, and even politicians chimed in. In the end, it was confirmed that the actual dress is black and blue, but that various digital effects had rendered it white and gold for many viewers. It was a relief to learn that the world had not actually gone crazy over a body-con dress.

Meanwhile, as friend became foes and families were being torn apart, companies jumped on the bandwagon to essentially say, "Who cares what color it is? Look at our products!" To their credit, though, some of these ads using #TheDress are pretty damn clever.

Many, Many Food Companies

Other Companies Championed Their Own Colors

But Perhaps The Best Use Of #TheDress Goes To...

More like this
15 Talc-Free Makeup Brands For Safer Eyeshadows, Powders, & More
By Audrey Noble
Kate Middleton's Tribute To The Queen Also Had A Connection To Princess Diana
By Sam Ramsden
Women Around The World Are Cutting Their Hair In Solidarity With Mahsa Amini
By Darshita Goyal
Kate & Meghan’s Outfits Paid Tribute To The Queen In The Most Poignant Way
By Sophie McEvoy
Get Even More From Bustle — Sign Up For The Newsletter