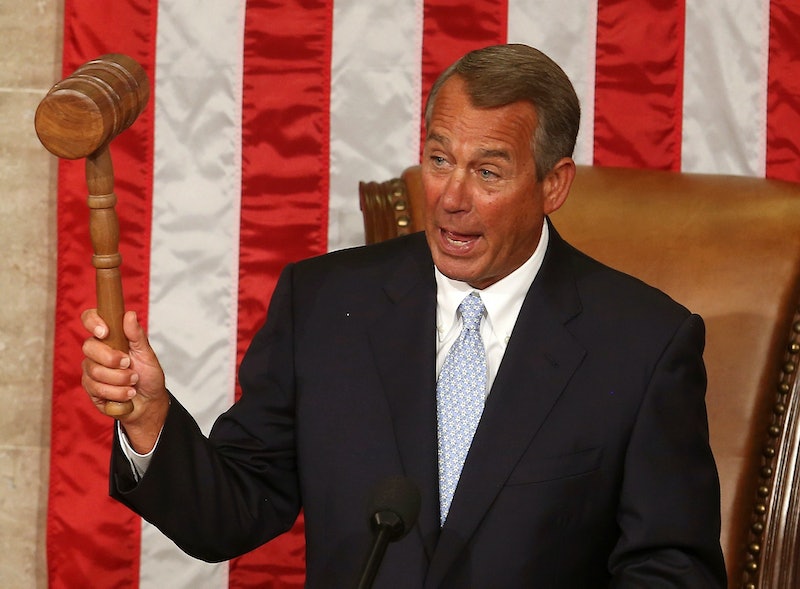 It's not a surprise, by any means, but that doesn't make it any less depressing. If you haven't heard, the Republican Party now controls both houses of Congress, and they're making it clear in that time-honored way congressional Republicans always seem to love: throwing up barriers between pregnant women and teens, and abortions. Or, at the very least, that's what they're trying to do — House Republicans added anti-abortion language to their education bill Wednesday night, yet another step in their by-any-means-necessary crusade against reproductive rights.

As detailed by the Huffington Post, the culprit here is Rep. Randy Neugebauer, a 12-year veteran of the House, and a longtime, staunch opponent of abortion. For some perspective on just how vehement Neugebauer is on the issue, he reportedly called former Democratic Rep. Bart Stupak a "baby killer" back in 2010, while Stupak was attempting to secure anti-abortion assurances before throwing his support behind the Affordable Care Act. Obviously, Neugebauer still found Stupak's anti-abortion principles lacking.

But, flashing forward to Wednesday, Neugebauer did something a lot more assertive and consequential — he tacked anti-abortion language into the Student Success Act, a GOP-led education bill. Because for the Republicans, as always, there's never a bad time to limit abortion rights.

Here's what Neugebauer's amendment is all about, as detailed by the Huffington Post's Laura Bassett: It's a measure to target schools that, while not providing information about abortion themselves, may work in concert with health centers that could. Under the bill's new language, any health center working with a public school would have to declare that they won't advise any students about abortion, even to the level of simply giving directions to the nearest provider.

It fits right in with various state-level GOP efforts to close abortion clinics through onerous TRAP laws (targeted regulation of abortion providers): slash the number of places you can go, then make sure you don't know where they are, or how to get there. If passed, schools that defied the new rules would be penalized by a halt in federal funding, a steep and deterring provision if ever there was one. Fortunately, there's no reason to think that President Obama will actually sign the bill, which is expected to sail through both the House and Senate — he's brandished the veto pen before, and has threatened to block the Student Success Act, for reasons wholly unrelated to abortion.

However, it would be nice to hear the White House make a bolder, specific comment on this, because the GOP-led war on abortion rights isn't just waged through laws that limit access, but social stigmatization, too. While it might not be the politically expedient thing to do, this would be a good chance for President Obama to stand up to the House's conspicuous anti-abortion fixation, and strike a blow for reproductive health.