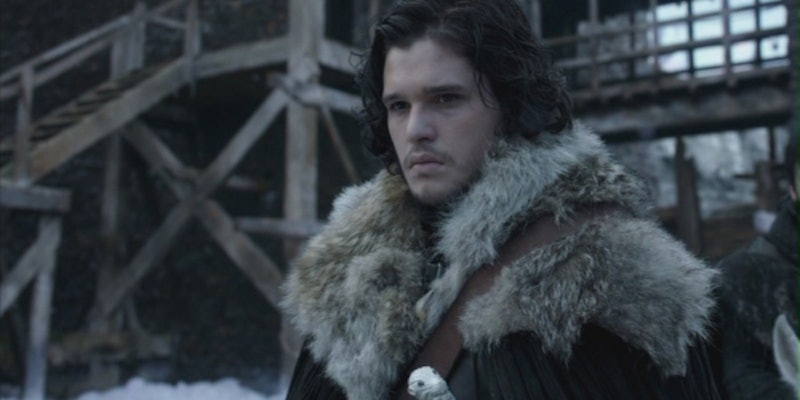 Just when we will finally be coming out of the depths of our winter misery, HBO will cover us once again in piles of snowy and icy tundras because come April 12, "Winter is coming." Well, Game of Thrones Season 5 is coming. The premium cable network has been releasing a series of clips that give viewers a glimpse into the upcoming season and the latest ones feature fan favorites Jon Snow and Brienne of Tarth. Surprisingly, Snow isn't crying, but he IS desperately trying to convince Mance Rayder to save his men. Meanwhile, Brienne curses the monstrous kings to whom she feels no allegiance. Then there's poor Podrick Payne, who was assigned to accompany Brienne and she essentially finds him of no use. But then again, she's Brienne of Tarth and she can do bad all by herself.

The clips are also shown through the lens of Greensight, a special prophetic power which allows Bran Stark to see into the past and future. The device reminds us that Bran is still very much involved in the story even though his character will not appear in Season 5. According to the showrunners, the adaptations have put Bran too far ahead in the story and he will be on hold for the upcoming season.

Let's take a look at everything we can gather about the highly-anticipated fifth season of Game of Thrones.

Brienne of Tarth and Podrick Payne

More like this
'GoT' Star Emilia Clarke Says She "Just Can't" Watch 'House Of The Dragon'
By Brad Witter
A New 'And Just Like That' Table Read Pic Confirms A Key Character's Return
By Jack Irvin and Grace Wehniainen
This 'Gossip Girl' Wardrobe Error Has Gone Viral On TikTok
By Alyssa Lapid
'The Last Of Us' Has Officially Been Renewed For Season 2
By Darshita Goyal
Get Even More From Bustle — Sign Up For The Newsletter
From hair trends to relationship advice, our daily newsletter has everything you need to sound like a person who’s on TikTok, even if you aren’t.