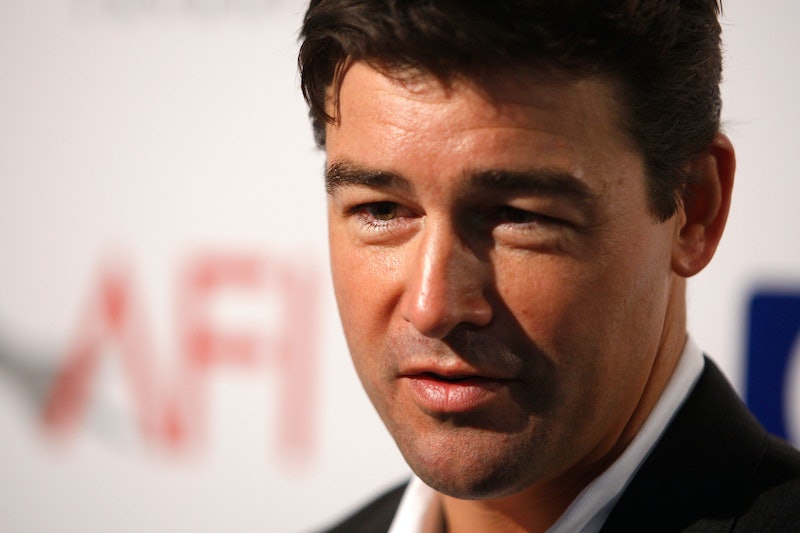 You know the saying: "Clear eyes, full hearts, can't lose." Well, it sure feels like we're losing without a Friday Night Lights movie! You know what makes it even worse? Kyle Chandler is the reason we're not getting an FNL reunion. *Deep breaths* The only reason I forgive the man that can do no wrong, aka Coach Eric Taylor, is because I understand his reasoning. As he told The Hollywood Reporter,

The show ended perfectly. It was five seasons, it was really good, and I just didn't see a movie.

This isn't the first time Chandler admitted he's the reason for the movie not getting made. In 2013, he confessed that an FNL movie just wasn't up his alley, because, you guessed it, the series went out on a perfect note.

Yes, FNL ended beautifully. I think any fan would find it hard to argue with that. When it comes to TV, I'm all about shows going out on top, and I definitely think Friday Night Lights did just that. With that said, it's still a little sad to not get a Dillon, Texas reunion, because I can't get enough of that town and the actors who portrayed all of the beloved characters.

With Chandler's admission, I think it's time we reflect on some of the vague answers other cast members gave as to why the movie wasn't happening or why they wouldn't do it. Basically, they all lied to us and I don't appreciate it one bit. I kid, because they were clearly just trying to protect the greatest coach in television history.

As FNL's creator told Collider in 2013, "There's not gonna be a movie. We talked about it, some people thought it was a good idea, some didn't. I've come to believe it's probably not a good idea and I seriously doubt it's gonna happen." I'm pretty sure when he said "some" he was referring to Chandler. Right?

OK. She didn't really get all angsty, but she did tell E! News this, "I really don't think it's going to happen. That is where the decision had to come from." She added, "Everybody needs to stop asking about that movie." Translation: stop asking, because Kyle Chandler won't let us make it.

Zach Gilford Got All Heartfelt

Matt Saracen told Moviefone Canada, "I think very slim. The whole beauty of that show was how authentic it felt. There's just no real good story that could be told that could bring all these characters back together, that have gone their own ways. It would feel very forced." And by "forced" he means they'd all have to force Chandler into doing it.

In an interview with Vulture, Kitsch showed his true Tim Riggins colors, "I'll just say no. [Slams fist on table.] No, period. I'm not doing it. I'm never gonna be in that movie. There was already a movie! And the show ended f--kin' spot-on. We're good." So, really, the only reason he slammed his fist on the table was to show how mad he is at Chandler.

When Landry chatted with The Hollywood Reporter , he said, “Any time you can get Kyle Chandler and Connie Britton together again, at the very least it’s going to be really awesome. No matter what the story is.” This is Plemons' way of sweet-talking Chandler into doing the movie.

Even though a FNL movie doesn't seem likely, at least we have five glorious seasons to enjoy forever and ever.