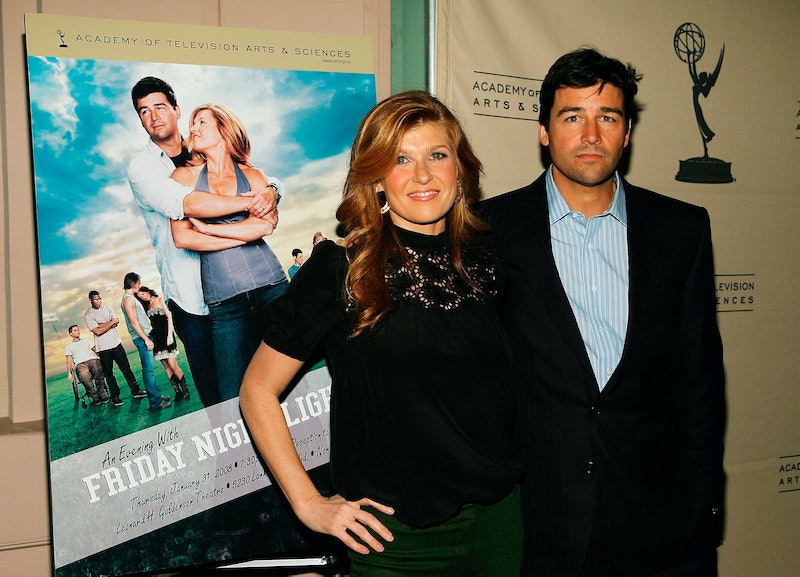 All you Friday Night Lights fans out there (so everyone with a heart), brace yourselves for huge disappointment. Kyle Chandler, Coach Taylor himself, isn't interested in turning the beloved, canceled show into a movie. I know. The despair hits you immediately, right in the heart — which was full while your eyes were clear, as per Coach's instructions. The thing is, you can't even be mad at Coach, I mean Chandler, because he only has good things to say about the show and its producers, as he told BuzzFeed:

Before you get too excited over how that itself isn't a rejection of the movie, BuzzFeed then asked Chandler if that meant he'd rather leave the show as it ended and not bring it back as a movie, to which he replied, "Yep...That was a great experience, I really loved it." As upsetting as all of this is, especially considering the recent news that Mrs. Coach, Connie Britton, had a script for the potential movie just a few weeks ago, Chandler kind of has a point — kind of. Here's why he's both right and wrong about how Friday Night Lights shouldn't be a movie:

Everything Chandler said about the Friday Night Lights finale was correct. The final episodes were perfect. All of the Panthers from the earlier seasons had some kind of closure, while the newer East Dillon Lions were given special send-offs of their own. And, in the very end, it all came down to that core of the show: Eric and Tami Taylor. The royal couple of Texas football headed to Philadelphia, because they loved each other and it was Tami's turn. There's not a single character who's future was left unclear.

Then there are the actors. Much of the show's cast has found some sort of success since Friday Night Lights ended, most notably Chandler, Britton, Michael B. Jordan, and Jesse Plemons. Let's not forget the size of the cast either, with more than a football team's worth of main characters over the show's five seasons. It would likely be difficult to get all of them together at once, and I don't think Friday Night Lights can pull off an Arrested Development-style reunion, where characters don't actually reunite very often.

To sum it up, BECAUSE WE NEED THAT MOVIE. I love Katims' current project, Parenthood, but it's just not the same. Yes, the finale let us know where everyone was headed, but then what? I want to see Coach and Tami's life in Philadelphia. Is she still the Dean of Admissions or is there now a whole Tami Taylor University? Did Coach turn an apathetic Pennsylvania town into a Texas-like football-crazed community? There are so many questions. Did Tim finish building his ranch and end up with Tyra like the finale hinted, or did Lyla come back for him? What college did Vince end up going to? Are Matt and Julie still in Chicago? I could go on for hours.

Yes, the show had a good ending, but that doesn't mean it had to be the very end. There are plenty more stories to tell, there have to be. Friday Night Lights was a character-driven show, and that means as long as you have those characters, the plot will follow.

Should He Do It?

In my least-biased-possible opinion? Absolutely, and I think it's still a very real possibility. With the right script, Chandler will see that there is more left to Coach. If he loved the first ending that Katims came up with, he's bound to love another. If it comes down to it, I'm sure the woman who played his wife for five years can convince him it's worth the chance. All he needs is a good old-fashioned Coach Taylor motivational speech.

Until then, we'll be waiting nervously for more news, like the Panthers staring down the field to see if they get the final touchdown. Texas forever.