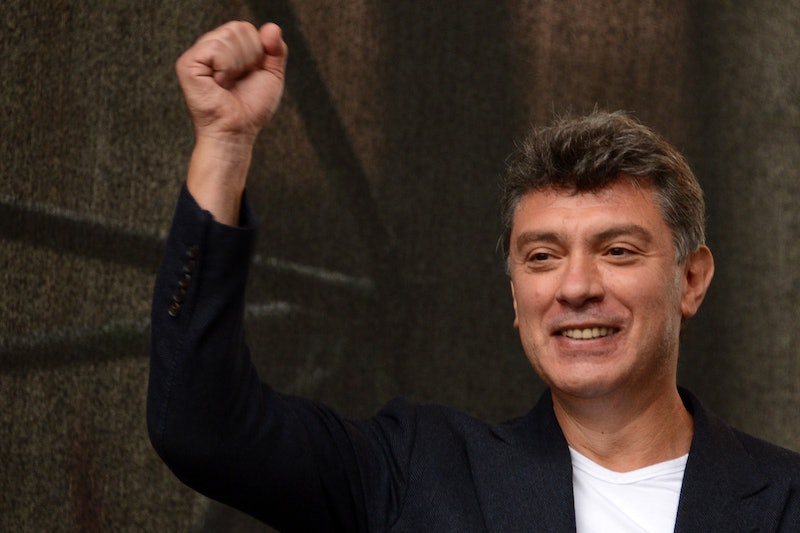 On Sunday, Boris Nemtsov was supposed to take the lead at the "Spring" rally, an anti-Putin demonstration that would have brought thousands to the streets of Moscow in anger and frustration over the declining quality of life under the Russian president's iron-fisted regime. But on Saturday, the protest was canceled in the wake of Nemtsov's assassination. The rally will now become a day of public mourning not for Mother Russia, but for Nemtsov and the fate of his democratic colleagues.

Nemtsov was killed late on Friday in a drive-by shooting while walking over a bridge near the Kremlin. Just hours before his death, he called Putin's policies "mad" and "aggressive" in an interview with a Russian radio station, the Associated Press reports. Two weeks before that, the opposition leader told the Russian blog Sobesednik that he was afraid "Putin will kill me" because of his fervid criticism and frequent political organizing.

A popular politician who was once thought to be the heir to the Russian presidency in the late 1990s, Nemtsov provided a symbol of liberalism under Putin's regime. Nemtsov was critical of Putin almost from the start, and began publicly decrying the Russian president during the early aughts. In 2004, after he resigned from his position with the Union of Right Forces, Nemtsov co-authored the article "Appeal to the Putinist Majority," one of his earliest published criticisms of Putin and his rollbacks of democracy in Russia.

In 2008, Nemtsov co-founded Solidarnost, a liberal opposition party that takes its name from the Polish trade union and solidarity movement founded under communist rule in the early '80s. Attempts have been made over the years to weaken the party, which has garnered support from numerous liberal politicians and dissenters.

Nemtsov also led the Parnas Party, a people's freedom party that valued liberalism, democracy and human rights, with fellow oppositional politicians Vladimir Ryzhkov and Mikhail Kasyanov. Throughout all of his political leadership and organizing, Nemtsov remained a staunch critic of Putin, and his new target was the Russian president's possible involvement in the year-long conflict in eastern Ukraine.

"I believe that he [Putin] was the one who unleashed the war in the Ukraine," Nemtsov told the Sobesednik blog two weeks ago. "I couldn't dislike him more."

Nemtsov was a passionate supporter of Ukrainian independence, and forged strong ties with many leaders in Ukraine, especially those politicians who were not backed by Russia. Sunday's Spring rally was supposed to be a rallying cry for not only Russia, but also for Ukraine — a uniting to show how Russia's involvement in the former Soviet nation was crippling both Ukrainian democracy and the Russian economy.

On March 1, tomorrow, [Boris Nemtsov] was going to join the march, leading a demonstration of several thousand people to show that there is another Russia which loves Ukraine, which respects human rights, and for which freedom is not an empty word and where for the sake of freedom and democracy he was ready to give his life.

According to his friend and colleague Yevgenia Albats, editor of The New Times magazine in Russia, Nemtsov was working on a report about Putin's alleged direct involvement in the Ukraine conflict. Albats told The New York Times that Nemtsov met with her just two weeks ago to share his research, which he hoped would reveal that Putin and the Kremlin may have sparked the ongoing war on the Ukrainian-Russian border, despite Putin's constant denials that the Russian government is not financially supporting the pro-Russian rebels in the region. Nemtsov wanted to publish his research in a booklet and title it, "Putin and War," Albats said.

The opposition leader made his position on Putin and Ukraine clear in recent weeks, his social media presence full of messages revealing clips of his research and urging others to join him in standing up to Putin. In his last Twitter message, Nemtsov invited his 68,000 followers to the "anti-war march," writing in a longer message on his blog: "Those who are for ending the war between Russia and Ukraine, who are for an end to Putin's aggression, come to March Spring. Come and invite your friends and family!"

The main slogans of the event, Nemtsov wrote, will be "Putin is war! Putin is a crisis!"