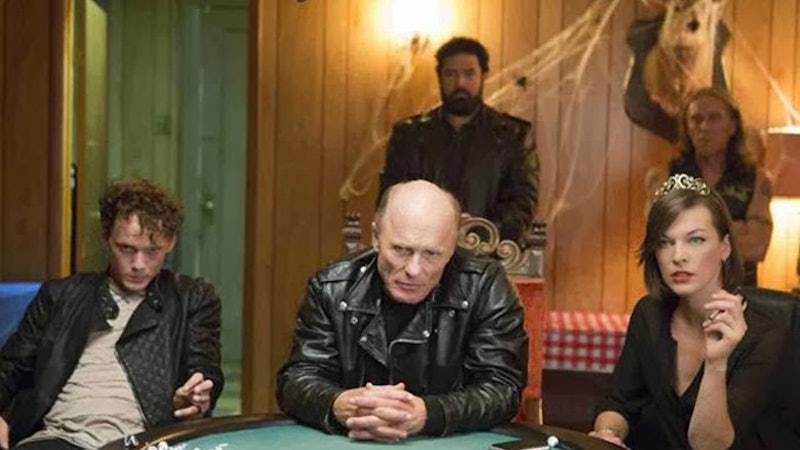 With all of the Fifty Shades of Grey promo recently, it might be a little difficult to switch gears and adjust to seeing Dakota Johnson in a different role outside of the lovesick shy girl Anastasia Steele, but based on the new trailer for the Shakespeare-inspired drama Cymbeline (which also stars Ethan Hawke, Ed Harris, Milla Jovovich, Anton Yelchin and Penn Badgley), Johnson's new character Imogen will definitely make the transition a little bit smoother. Another thing that will help set those Fifty Shades flashbacks aside (temporarily, at least) is the fact that Cymbeline is so freakin’ intense. I mean, I realize it falls under the drama category, but seriously, there is so much extreme action in this official two-minute trailer that I’m pretty sure I’ll need a stiff drink and a nap after watching the entire movie.

From what we know about Cymbeline so far, it’s a modern spin on a centuries old Shakespearean tale of the same name, and thanks to the biker gang plot, it looks extremely similar to Sons of Anarchy. A trailer for the film was released in September and shortly afterwards, Cymbeline premiered at the Venice Film Festival. If that feels completely unfair, fret not because the U.S. release date of March 13 is right around the corner.

Until then, I’ve compiled 8 of the most intense scenes from the new Cymbeline trailer:

Yikes, I can't imagine this will end well.

Nothing good can come of shooting a guy, running him over and then surrendering.

Holy crap, that is one huge knife. I'm guessing he's not about to butter any bread.

Not sure what's happening here, but I'm literally dying to find out.

Like, is this a game of homemade Twister gone wrong or nah?

She's clearly concerned and so am I.

While Dakota is Sleeping...

Harris' shoot-off mug would make the Sons of Anarchy proud.

Check out the full Cymbeline trailer below: