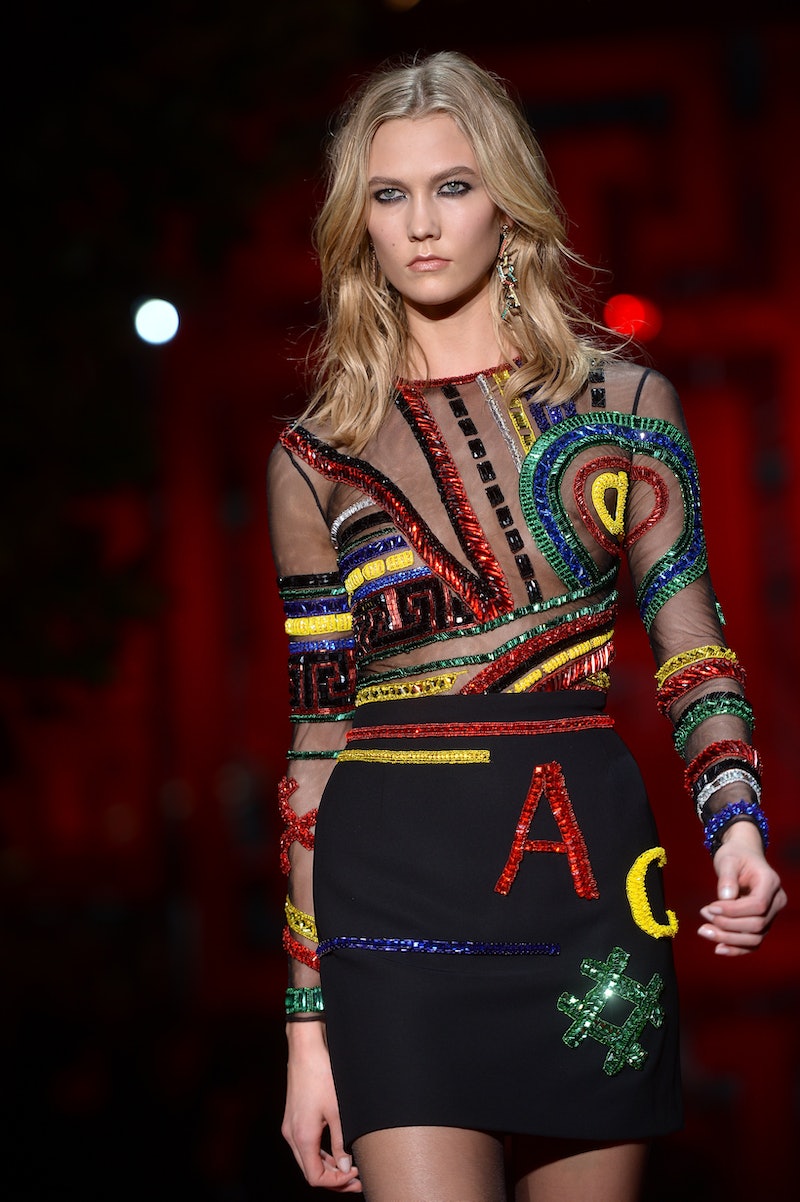 Judging from the designs at the Versace show in Milan this afternoon, I would guess that Donatella has finally joined Instagram or Twitter. The Versace A/W 2015 Collection celebrated internet speak by incorporating hashtags and "@" signs into their runway offerings.

The Versace A/W 2015 presentation went down this afternoon in Milan, and if I were to describe the theme in a fashion-marketing-friendly theme mashup, it would be '90s meets millennial alphabet soup. Letters, and @-signs, and hashtags (oh my!) were emblazoned on a handful of the closing dresses. If you're the kind of compulsive social media user and internet speak junkie who has begun to incorporate the hashtag into your speech in earnest, you're liable to go bonkers over these outfits.

Moving onto some of the other looks, there was a definite early '90s feeling in the air. Logo-printed sweatshirts made plenty of appearances. Primary colors dominated in a series of monochrome outfits in Crayola blue, green, red, and yellow. In some of their more contemporary looks, form-fitting black dresses with cutouts and sheer panels were plentiful. Lastly, there were a few outfits made of the Versace signature Greek key in patchwork. The result arguably the most intense textile magic eye ever fashioned.

Supermodel/Taylor Swift's better half Karlie Kloss sported the hashtag and "@" combo, although the "#" could always be interpreted as a tic-tac-toe board.

Were Nomi Malone of Showgirls born in 1997, the above dress would be her jam.

Apropos of nothing, the above sheer shirt reminds me of legos. That is all.

Lastly, this is the most insane patchwork I've ever seen. I feel like there's a #blueandblack #whiteandgold joke to be made here, but my energy has been drained by merely viewing the above outfit. #SensoryOverload