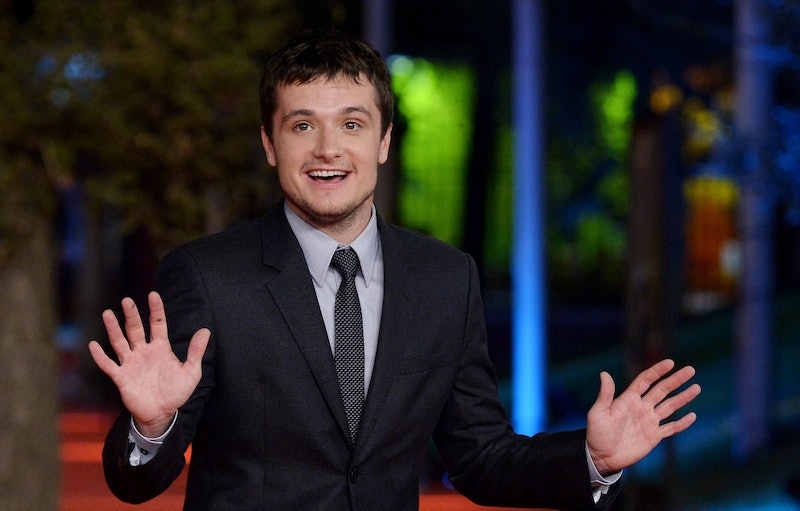 Despite its popularity, there are still several celebrities who have a huge Twitter phobia and after seeing how some celebrities' tweets can get way out of hand, I can completely understand Josh Hutcherson’s aversion to tweeting. The 22-year-old actually does have an official Twitter account, but according to his recent appearance on The Tonight Show, he's just not up for using it. In case you're thoroughly confused as to why Hutcherson won't tweet, the Mockingjay star offered a rather precise breakdown of why he avoids doing so, and here's a hint: He doesn't want to wind up on this list of celebs who quit the Twitterverse.

That's too bad, for a number of reasons. For starters, imagine the awesome selfies we missed out on when Hutcherson attended Beyoncé’s concert. Surely, that would've sent his mentions into insanity, but then again the Beyhive may have come on too strong for him. Also, since he revealed that someone else runs his Twitter account, we can assume that Hutcherson truly didn't give a crap about the color of #TheDress, despite having thrown in his two cents on the black and blue or gold and white debate.

Anyway, I'm not one for peer pressure, so I'm totally fine with Twitter avoidance, but I think Peeta Mellark would have a thing or two to say about Hutcherson's explanations for why he shies away from tweeting:

"I shouldn’t have a Twitter with two-point-something million followers."

Peeta would be all, "Pshh, whatever dude. Talk to me when President Snow starts following you."

Considering Peeta lives in constant fear of death, I think he'd be totally relieved by Hutcherson's ability to avoid disaster.

Um, apparently Peeta knows that Hutcherson just isn't into expressing himself in 140 characters or less, and is totally fine with him having a ghost-tweeter.

"You can take 12 years to build a career and ruin it in 140 characters or less."

Peeta's response: "What's that, Josh? You're concerned about your career?! Well that's cute because I can barely see out of my right eye."

"It’s too powerful. It’s like the ring in Lord of the Rings."

Peeta's response: "Seriously?! Did you just defend your anti-Twitter stance by referencing another movie franchise?! Unbelievable."

"That way I can’t ramble like, 'Argh, I hate Hunger Games!'"

Oof, Josh. I don't know how Peeta feels about this, but you might find yourself in this in a dangerous predicament if you don't take back those words.

"You don’t want it, man. It’s too much responsibility!"