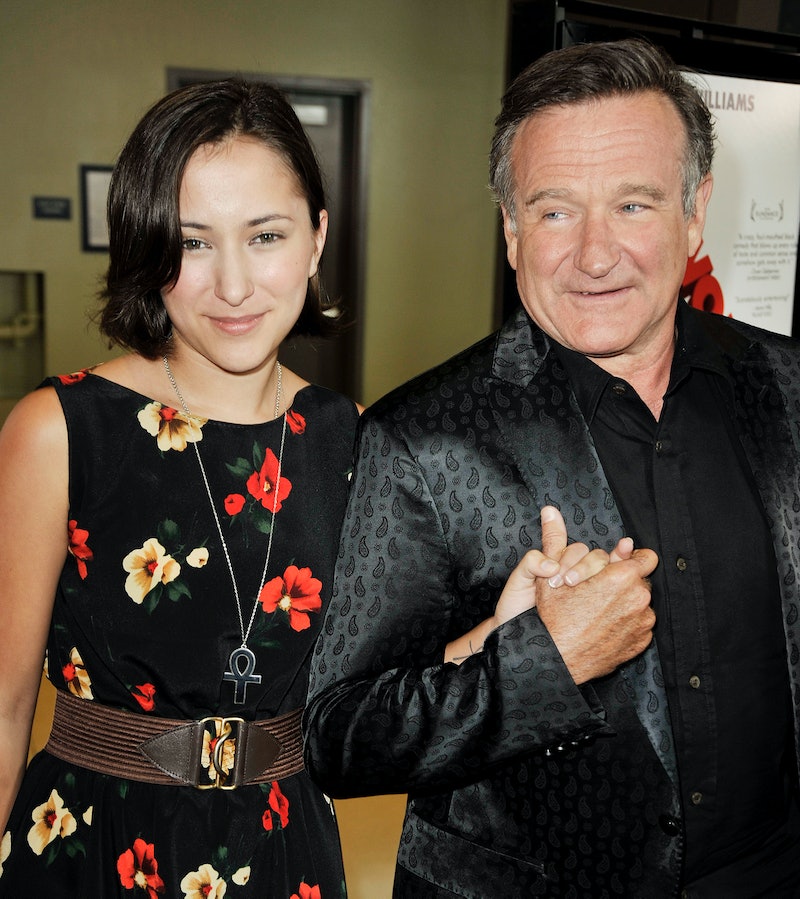 After her father's death, Zelda Williams got a touching hummingbird tattoo to honor Robin Williams. Although she's had the ink since October, it was only on Friday that Zelda opened up about the meaning behind her tattoo, and how it's helping to keep her father close by. She was attending the Noble Awards to honor her late father's biking buddies, when Us Weekly asked her about the hummingbird.

"I wanted to honor my father, and to put it on my hand, the hand that I shake hands with. It meant a lot to me. I really enjoy it," she said of the ink. But even more than being part of people's first impression of her, Zelda says the hummingbird represents her father in the best way.

"If you've seen them fly, and if you know a little bit about them, they're impossible to keep in one place. And that was the reaction that my father got, from children, from fans, from senior citizens. And that's what hummingbirds always meant to me."

The description so perfectly sums up Robin Williams, that I know I'll think of him whenever I see a hummingbird now. He was known for his quick wit and fast brain, jumping from one impression to the next and telling a series of jokes at lightning speed.

He really was the human version of those tiny, fast-moving birds. So much so, that Williams' family even handed out wristbands with hummingbirds on them at his memorial.

To both his family, and now the public, Williams is synonymous with those small creatures. Through that, his legacy will never really go away. Not only is his daughter is dedicated to still supporting to Williams' favorite charities, now she'll have that hummingbird memento wherever she goes in life.

"For me it's easy to continue remembering someone that is impossible to forget. It comes and goes in the sense of actual visceral moments, but as anyone who has lost someone knows, it's not like they were never there, it just means that they're not there anymore," Zelda said of her father. "You can continue enjoying those memories, and inhabiting them as much as you like, as long as they don't stop you from continuing to live, and doing wonderful things."

It's wonderful to see how well Zelda is coping these days. I'm sure her father would be more than proud of the daughter he raised, and how she's chosen to keep his memory alive.