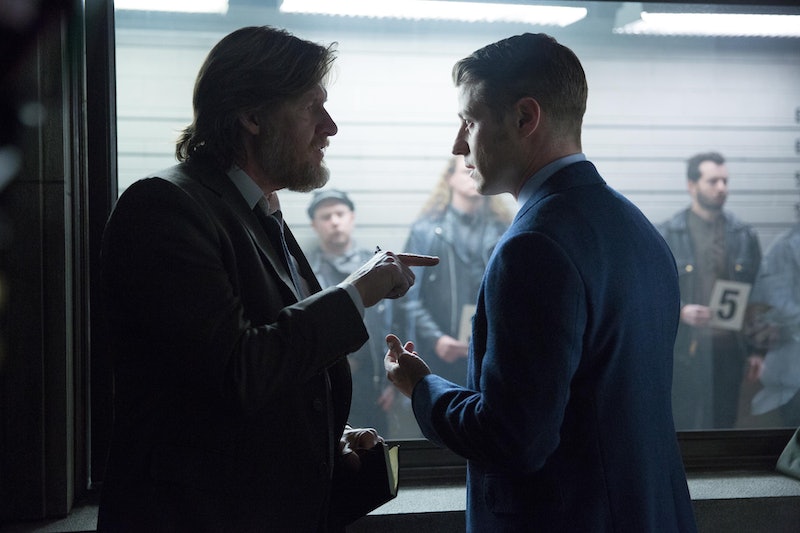 I think most viewers have come to accept that Gotham is never going to be the Batman-prequel we were hoping for. Its odd mix of camp and 1970s neo-noir doesn't consistently work, but the show has become so insane lately, like with Fish Mooney scooping out her own eyeball, that you just kind of have to go with it. But one thing I can't go with is the need to create a bunch of characters who may end up being the Joker. This lets Gotham have the gravitas of broadly hinting at the iconic villain without doing what's necessary to make such stunts matter in the long-run, like character development and common sense. Seriously, who is the Joker on Gotham ?

We've seen a few characters hinted at being the Joker, starting with a comedian in the pilot episode. Executive producer Bruno Heller told Collider that Gotham would continuously tease the identity of the Joker throughout this season. But the show is going much farther than just teasing since it introduced Jerome in the Feb. 16 episode "The Blind Fortune Teller." Jerome is a teenager, putting him around the age of Gotham's Bruce Wayne and Selina Kyle, which would make sense for the eventual Joker. He's got mommy issues, a lot of rage, and is very willing to kill. But what really hammers the idea of him being the Joker is how on the nose the performance is. Actor Cameron Monaghan mixes the Heath Ledger and Jack Nicholson performances with creepy smiles and a lot of rage.

Heller talked to E! Online about Jerome specifically becoming the Joker on Gotham.

I can tell you this is a long game plan and a long story that we are telling here. What I can promise you is this is not a bait-and-switch. This is not someone who is just a character who is going to disappear. This is not a red herring. It's the beginning of the story of how the Joker came to be, how the Joker was created, where he came from, who he is. Now, that doesn't necessarily mean that Cameron Monaghan is the Joker. He might be.

But a bait and switch is exactly what Gotham seems to be doing, because I would bet Jerome doesn't become the Joker. He's just another character the show is using to manipulate its audience. By giving the actor certain iconography associated with the Joker, the show becomes padded with even more easter eggs, but they don't actually further the plot. If Jerome really is the Joker, what is the point of Heller being so vague in interviews? It could just be to build up interest, but I would bet we haven't met the Joker yet on Gotham.

Actor Ben McKenzie, who plays Detective Jim Gordon, is equally as vague in an E! Online interview, saying, "He's possibly going to be the Joker because it's an origins story. We...have a couple of possible people who could be the Joker." Gotham risks alienating its audience by continuously hinting at the Joker with no pay off. Based on the vague answers from cast and crew, I suspect we haven't met the Joker. I just hope Gotham has a gameplan so that when the Joker is eventually revealed, he lives up to the hype.