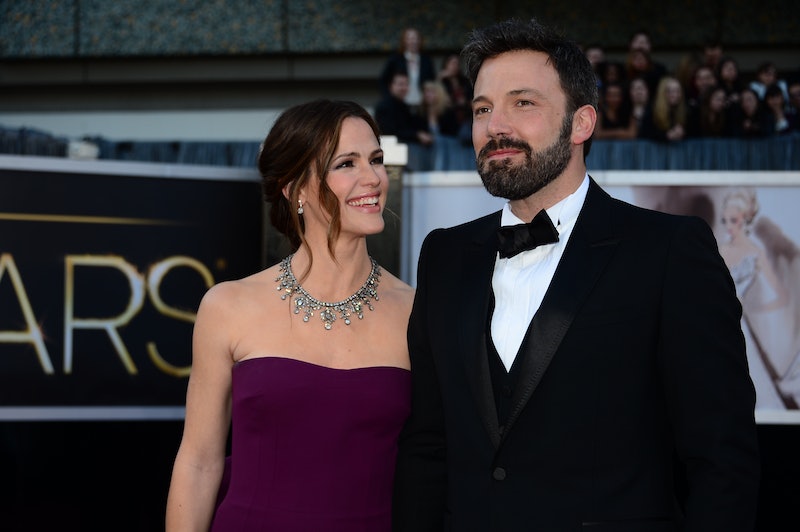 I don't have any kids, but I can say with a certain degree of confidence that raising children is a pretty difficult task — and for celebrity parents, I'd say the stakes are raised even higher. Not only are they making tough parenting decisions, but their decisions are out there for the world to see and judge, which has to be a ridiculous amount of pressure. Fortunately, as far as Jennifer Garner and Ben Affleck go, this doesn't seem to be an issue. They make it seem like rearing their brood (Violet, Samuel, and Seraphina) is a piece of cake, and Garner and Affleck are both super adorable with their kids And although I've always known they're one cute family, Us Weekly has officially confirmed it for me — mostly because Garner says their children's friends think she's the famous parent, not Affleck. How cute is that?

It makes a little sense when she explains it. Garner's been in movies, like Alexander and the Terrible, Horrible, No Good, Very Bad Day, that kids would have seen, while Affleck stars in movies that are more appropriate for adults. But their kids' friends don't seem to even acknowledge that Affleck exists in the entertainment world. As Garner tells it:

My kids really got a lot of juice out of the fact that I was in that movie. I heard about a little kid saying to their mom the other day at school. The mom said something about Ben and the little kid said, "No, Sera's mom is a movie star, and her dad just comes along." I was like that's awesome, because she saw Alexander.

And since Garner and Affleck became parents, there have been a lot of these sweet stories they've shared. If they're ever looking for a nanny, I'm totally available.

In which their kids are over Dad doing scary movies

Just like their friends don't recognize Affleck as an actor, the kids might not either if they didn't know any better. In fact, they've brought it to their mom's attention that they're tired of their dad doing movies they aren't old enough to see.

My kids are always saying, "Mom, you're our only hope. Dad does all these grown-up movies. We can't see Argo or Gone Girl. Batman looks too scary. You have to do things we can see!"

The upside? When they get older, they're going to have Affleck's entire resume to watch, like a present waiting to be unwrapped. And, OK, it's a little different when your dad is starring in all these awesome movies, but who wouldn't love Pearl Harbor?

In which Garner & Affleck split up the parenting duties

In a 2014 issue of In Style, Garner discussed how their busy work schedules require them to be in charge of different areas of their kids' lives. Garner is more focused on their day-to-day stuff, while Affleck pops in when he's not filming to make everyone laugh.

I know who wants what lunch, and I've done all the school paperwork and filled out the emergency cards. Ben doesn't know that stuff exists. He is in charge of laughter. No matter how much I tickle them or toss them or chase them around, it's not the same. If I'm the slow, steady drumbeat, he's the jazz.

It's so not fair that dads so often get to be the fun parent. Moms are fun, too!

In which the entire family got lice

And, you know, was in the midst of dealing with it the first time that Garner got to meet George Clooney, which sounds like a nightmare. If you haven't seen the interview in the video above, you have to watch it, because Garner does a killer impression of Affleck.

In which they raise their kids to be feminists

Affleck and Garner have said they want to impress upon their children the importance of equality between men and women through practicing what they preach. As Affleck tells it:

Well, [they're] a little young for a sort of Gloria Steinem doctoral thesis, but without getting into exactly what it means politically to be a feminist, our daughters understand what my wife understands full well, which is it's important to be strong, present, and powerful, and accept nothing less than a man would — in fact, ask for more. And, you know, that's part of what I admire so much about my wife, and I know that through her example, my children will absorb that.