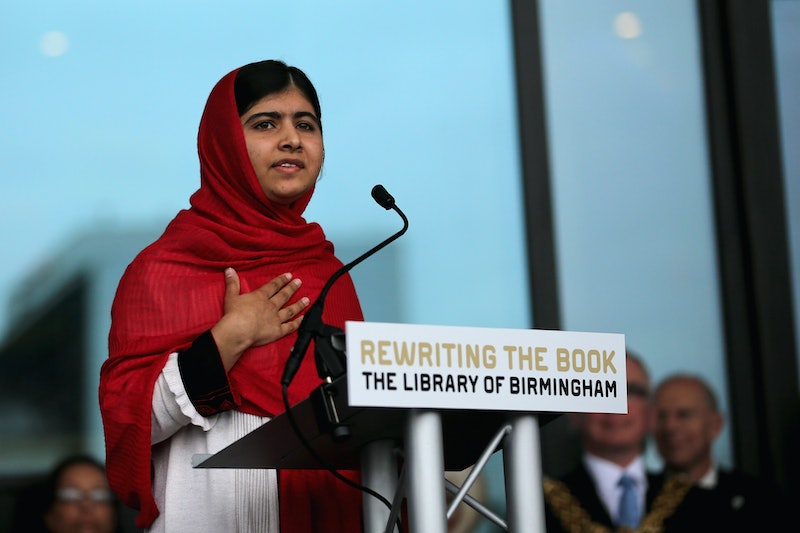 Well, the Nobel prizes are in, and the Peace Prize isn't going to the 16-year-old activist and frontrunner-favorite Malala Yousafzai. Instead, it went to the Organization for the Prohibition of Chemical Weapons, the group charged with disarming Syria and other nations of illegal arsenals. That's pretty important too. But schoolgirls back in Yousafzai's home country Pakistan are reportedly very sad about the loss, and rightfully so.

Last year, when Yousafzai's vocal opposition to the Taliban's interference with girls' education caught international attention, a Taliban gunman boarded her school bus and shot her in the head. After her remarkable recuperation, Yousafzai has since used her new standing and home in England to spread her message — something that would not be possible at her home in Pakistan, where the Taliban has renewed their promise to kill her, and has threatened anyone caught with a copy of her book, I Am Malala .

When the prizes were announced today, reporters from ABC were watching with a group of girls at the 5,000-student strong Islamabad College for Girls. They watched smiles of expectation turn to hard lines of disappointment. But, of course, the schoolgirls said, she's still an inspiration.

"She may have lost," one told ABC. "but she's already won our hearts."

"Who else who stands up for us the way she has?" said another of the girls.

Though Yousafzai was a favorite and serious contender for the Peace Prize, she was the youngest nominee in the prize's history. It's speculated that it's largely because of her age that she didn't receive the prize. Of course, she still has plenty of time to get a lot of work done, and the prize generally recognizes collective or ongoing achievements accomplished over the course of decades or a lifetime.

Supporters of Malala also took to Twitter to express their disappointment.

Yousafzai, too, knows that there's time yet.

The only people taking this better than Yousafzai are the Taliban, who couldn't seem to contain their glee.

Funny, that sort of sounds like something a bully who beats up kids he's secretly intimidated by might say.

After all, Yousafzai might just be Pakistan's Prime Minister one day.