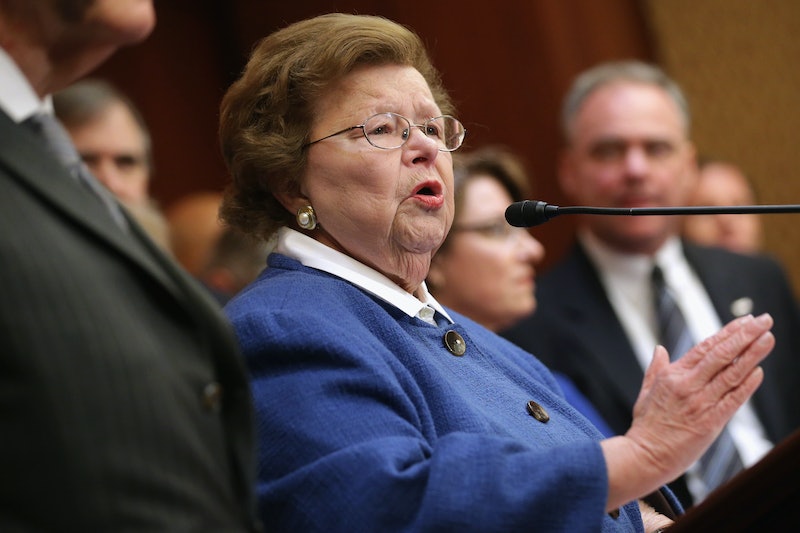 As if your Monday wasn't rough enough, the longest-serving woman in Congress, Senator Barbara Mikulski, is retiring. Mikulski announced Monday in her hometown of Baltimore that she will not seek reelection, stepping down when her term ends in 2017. The Maryland Democrat has served in Congress for almost 40 years, and was the first woman to head the Senate Appropriations Committee. Washington is losing a wonderful female leader; the 78-year-old feminist firecracker has continually stood up for women's rights.

Mikulski served in the House of Representatives for 10 years before running for Senate, where she's served five terms, totaling 30 years when she leaves office in 2017. She had to give up her post as chairwoman of the Appropriations Committee when Republicans took control of the Senate a few months ago. Mikulski says she wants to spend the next two years focusing on her work in the Senate rather than fundraising and campaigning.

In a statement announcing her retirement, she said:

Because every day, I want to wake up thinking about you — the little guys and gals, the watermen, automobile workers, researchers, small-business owners and families. I want to give you 120 percent of my time with all of my energy focused on you and your futures. Because it’s always been about you, never about me. That’s what it takes to be a good senator by my expectations and by my standards.

Of the 1,963 people who have served in the U.S. Senate, only 46 have been women. Despite being in the minority, Mikulski has stood up for women through the legislation she supports, as well as her personal actions. Let's take a look at some of Mikulski's most feminist moments...

"The Year of the Woman"

In 1992, seven women were elected to the Senate, including Mikulski, and it was dubbed "The Year of the Woman." Mikulski responded by saying the label "makes it sound like the Year of the Caribou or the Year of the Asparagus. We're not a fad, a fancy, or a year."

In 1993, Mikulski made a bold statement by wearing a pantsuit on the Senate floor. The Senate dress code still required women to wear dresses or skirts with a jacket, and Mikulski, along with fellow senator Carol Moseley Braun, rebelled against the archaic rule. Thanks to Mikulski and Braun, female senators in Washington get to enjoy the comfort and freedom of pants.

Standing Up To Her Male Coworkers

People are intimidated by this powerhouse and for good reason. Members of her Senate Appropriations Committee said, “We loved Byrd, we respected Inouye, we fear Barbara," referring to the two previous chairmen. During a floor debate in 2013, Mikulski ordered Senator John McCain to return to his office and read a bill so he could adequately vote on it.

Last year, the senator introduced a bill that would help close the wage gap between men and women. "I introduced the Paycheck Fairness Act to fulfill the promise of the Equal Pay Act and give women and families a fair shot at equal pay for equal work," she said in a statement. "We've been at this for fifty years! And women still make just 77 cents for every dollar a man earns."