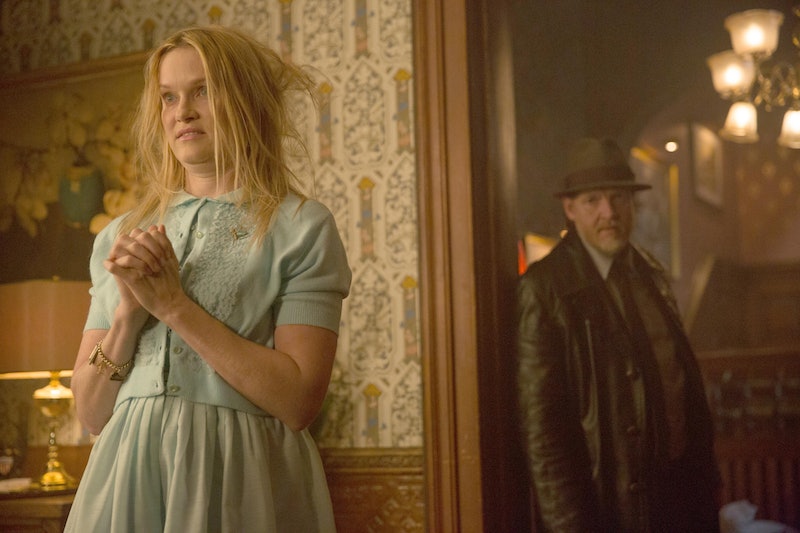 This week's episode of Gotham was all about the downfall of corrupt Commissioner Loeb, played by Peter Scolari, after the discovery of his daughter, Miriam Loeb, who was being trapped in an attic in order to avoid being sent to Arkham Asylum. And while it was hard to buy Hannah Horvath's affable dad as a murderous, corrupt cop, he was totally believable as a desperate father who committed all sorts of crimes to keep his daughter safe. And we got to see Scolari's Girls wife, Becky Ann Baker, as one of Miriam's caretakers, who may have seemed folksy but were really cold blooded killers.

At first, it just seemed like a straightforward procedural, as Gordon investigated Loeb's various deceptions with the help of his partner, Harvey (who Loeb had major dirt on) and Oswald Cobblepot. And just like "Everyone Has a Cobblepot" meant that every cop had something unsavory in their past, it also meant that everyone had a secret and a surprise in store. Cobblepot, as always, turned out to have orchestrated the whole thing — maybe he wants Jim Gordon to get more power now that he owes Oswald a pretty big favor.

But "Miriam Loeb" isn't the name of any big comics characters, and in the comics Commissioner Loeb is way more of a slob with a more normal home life. Miriam did have some pretty strange qualities that could point at her eventually becoming a major Gotham character, or even an all-new villain.

She Was Obsessed with Birds

This jumped out immediately — she was grabbing birds and turning them into jewelry. That's not unlike the young Jonathan Crane's experience with Scarecrows...

And She Was Kind of Smitten With Penguin

The Penguin doesn't really have girlfriends in the comics. Sure, every so often he'll have a girl on his arm at the nightclub, but you don't really get the sense that it's a loving relationship. Maybe Miriam will become the first true partner in crime for the crook.

She Loves to Sing

Miriam killed her mother because one night that was supposed to be all about her singing performance, her mom sang instead. While she clearly has some mental issues if her response was to bludgeon her own mother, her love of singing might make her into a powerfully voiced villain — like a bad version of Black Canary.