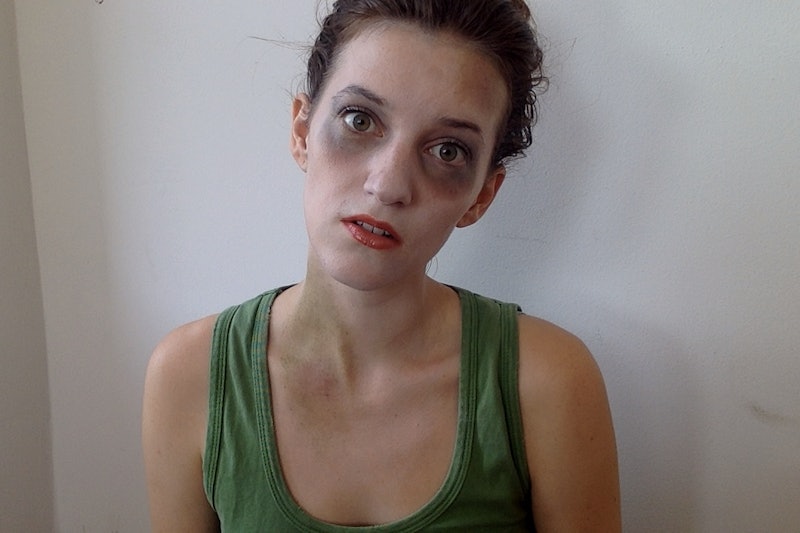 Zombie makeup is mad intimidating. A quick Pinterest search revealed more rotting cheeks, gouged-out eyes, oozing wounds, and bones poking through ruptured flesh than I ever want to see in this lifetime, let alone in the (undead) next. When people go zombie, they tend to go hard — fake peeling skin, tons of blood, rice grains as maggots, the horrific works.

I don't have any oozing brain makeup around — I don't even know what that looks like — and I have a really queasy stomach, so torn/ruptured/rotting anything was pretty much out for me. I mean, I basically faint every time I have to walk into a hospital. This graphic look was just never going to happen (DO NOT CLICK if you're easily grossed out).

Instead, I decided to do a subtle, fairly un-destroyed zombie. I collected a bunch of almost-pretty looks on my zombie Pinterest board and noticed the things they had in common: pale skin, lots of bruising, and mournful, deep-set eyes. I figured my zombie has just been infected, so she hasn't had time to eat anyone's brain yet. She's not blood-spattered, and since she's only been undead for about 24 hours, nothing is rotting yet. In fact, she doesn't even realize she's a zombie yet.

Turns out, this look is incredibly easy to pull off, and requires zero knowledge of contouring, fake-wound-creating, or any of those scary makeup-professional terms. Friends, this is zombie makeup for the average undead Jane.

1. I coated my face with white makeup — lightly, like in the vampire look. This is really good for your skin, btw. Not.

Mooom, I don't feel so good.

2. Using yellow and green grease paint and the ever-handy stipple sponge, I gave myself two bruises — one on the neck, one on the forehead. You can make yours as big and as nasty as you want; just start with green all over the bruised area, add yellow in the middle, and blend blend blend. I kept mine pretty subtle and realistic, which makes them creepier, in my opinion.

3. Too subtle? Yeah, I thought so too. I added purple paint to the middle of each bruise, to make them look a bit more serious. Then, I bruised up my eyes.

I'm really happy with how the eyes turned out. They're so creepy, right? I didn't think I had it in me! Here's how I did it: with a finger, I smeared light gray paint all around each eye, from brow to under-eye region. Then I took the stipple sponge and dabbed green, yellow, and purple paint beneath each eye, which gives it that saggy bruised effect. (Ack!) It looks sophisticated, but it's honestly fool-proof, as bruises tend to be imperfect. Just make sure you blend the colors until it looks natural. Or unnatural, as the case may be.

I mean it, I reeeally don't feel good. Was it something in the water?

4. As the zombie bite coursed through my blood, making me more and more lethargic, I managed to pull myself together enough to apply some mascara and lip gloss, desperately hoping I was still a human.

But nothing helped. I still just wanted to sleep... forever...

But then I smelled something.

And I wanted it.

I wanted it for my very own.