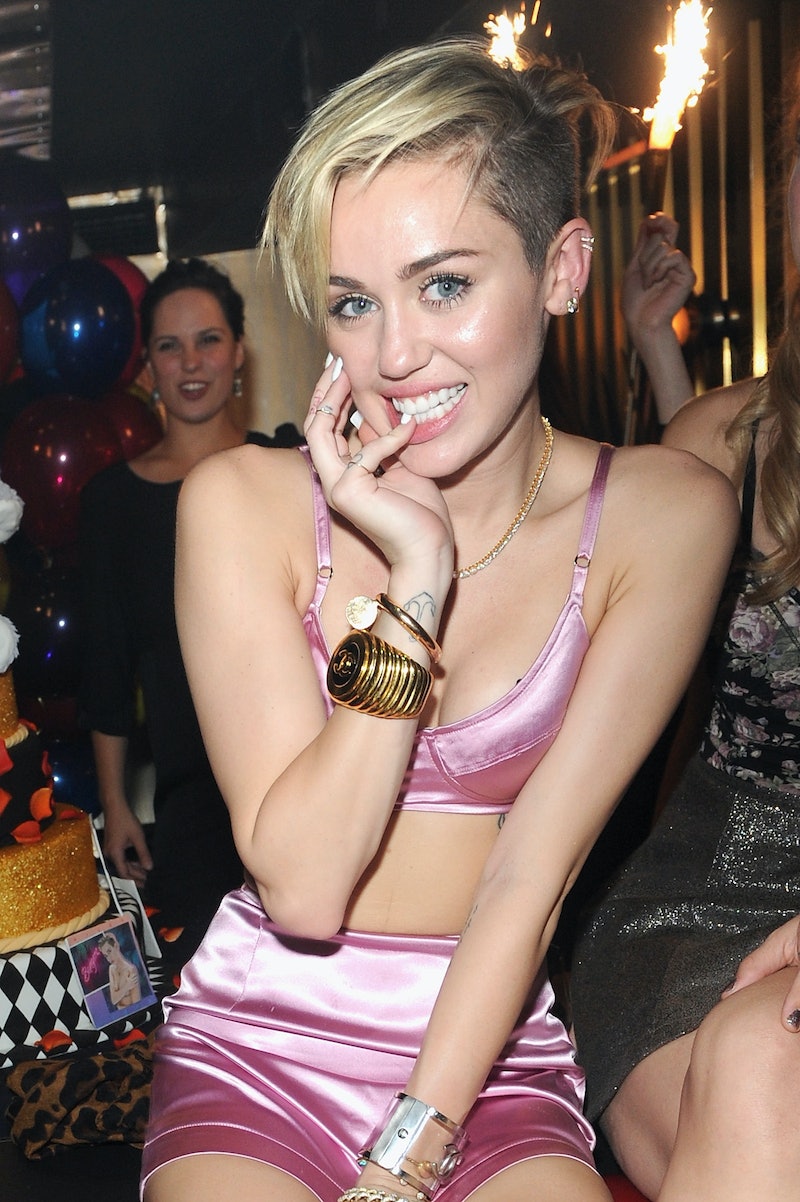 So, depending on who you ask, Miley Cyrus is is either a) destroying feminism or b) propping it up in new, nearly-naked ways. Sinead O'Connor is appalled. Gloria Steinem thinks she's merely trying to succeed in a system that's broken. Regardless of which camp you fall into, it's impossible to think or talk about Cyrus, O'Connor, or Steinem without thinking and talking about what it means to be a feminist (and a woman) in 2013.

The fact is, it's complicated. We fundamentally believe that we deserve equal rights, equal access, equal pay, and equal opportunity to men, but we are not our mothers, nor our grandmothers. They battled against locked doors. We hit up against glass ceilings. They fought for access to elite colleges. We are graduating college at higher rates than the boys we grew up with. We want to be stay-at-home moms, and we want to be good at it. We want to be CEOs, and we want to be good at that too. Some of us want to use and objectify men for a while, so we aren't offended if they do the same to us. Some of us refuse to settle for being treated any less excellently than we deserve at all times. All of us make mistakes, either occasionally or often. We are too multifaceted to be reduced into one breed, one brand, or one type of anything.

That means that Sinead O'Connor and Miley Cyrus both have equally valid brands of feminism. That means that there is space for all women, for all identities, within the feminist movement. Fellow musician Amanda Palmer put it brilliantly when she said, in her own open letter,

"...there needs to be room on the vast playing field for Adele to wear a conservative suit, room for Lady Gaga to do naked performance art in the woods, room for PJ Harvey to wear high-collared 18th-century jackets on stage, room for Natasha Kahn to pose boldly naked on the cover of her last record, and room for Miley to rip a page out of stripper culture and run around like a maniac for however long she wants to."

We are hyphenated writers-poets-interior designers-financial analysts-law students. We are too complex to be placed into boxes. We understand that there is no right way to "do feminism." We are allowed to pick on each other. We are allowed to question the ways that other women express themselves. But we are not allowed to disrespect them. Miley's feminism may not be yours, but it is one of ours. Feminism has changed. It is intersectional. We are people. We are women. Some of us want to beat the system, some of us want to change it, some of us want nothing to do with it, but the point of the women's movement was to ensure that we have that choice.

More like this
Sandra Bullock, Girlboss Extraordinaire
By Matt Harkins & Viviana Olen
The 'Hocus Pocus' Sequel Finally Has A Release Date & It Makes Total Sense
By Shannon Barbour and Radhika Menon
Harry Styles Called For "Backlash" In Powerful Statement On Abortion Rights
By El Hunt
Spice Girls’ Net Worth: The Richest Member Is Wealthier Than The Rest Combined
By Hugh McIntyre
Get Even More From Bustle — Sign Up For The Newsletter