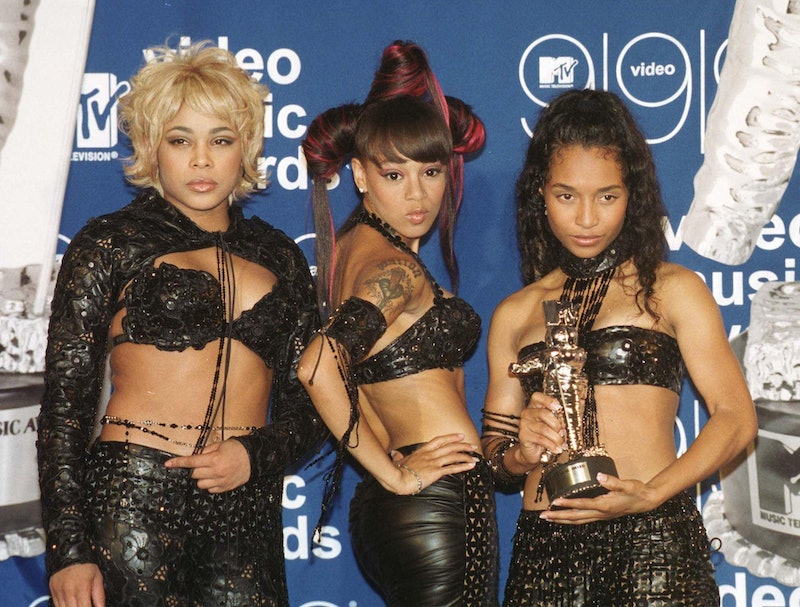 Being confused about what pop songs are really about is as much of an adolescent rite of passage as your first awkward school dance or your first patch of unmanageable body hair. The world of love, rage, and other adult emotions is so new and confusing at that age, and it's often tough to suss out what the lyrics of songs meant — particularly when your own universe of emotional and romantic experience only extended to a never-acted-upon crush on your Earth Science Lab partner. (Brent, are you reading this? I filled in our geode worksheets for you!)

But sometimes, the real meanings of popular songs continue to evade us well into adulthood — either because we've stayed immature, or because a song's true lyrical content is so complicated and obscure that you'd have to be some kind of loser, willing to devote hours of her life to sifting through video interviews with members of the Goo Goo Dolls, just to figure it out.

Well luckily for you, I am exactly that kind of loser! And via my loserdom, I bring sexual depravity of the Red Hot Chili Peppers you 11 songs from the '90s whose true meanings you almost definitely missed (probably because you were busy doing that "circle sway" dance to them).

So read on, and find out how your parents were wrong about the sexual depravity of the Red Hot Chili Peppers, who was actually getting kicked out during "Closing Time," and what unit of measurement an "mmmbop" qualifies as.

What You Thought It Was About: A slide as a metaphor for love. Plus, that "what you feel is what you are, and what you are is beautiful" part sure was great to rip off for those letters to your 8th-grade crush that you never actually sent, right?

What It's Actually About: An accidental pregnancy.

Explanation: "Slide" joins Ben Folds Five's "Brick" as one of the handful of hit songs of the '90s that were actually about abortion. In a 2002 episode of VH1's Storytellers, singer Johnny Rzeznik explained that the lyrics are about "these two teenage kids, and the girlfriend gets pregnant, and they're trying to decide ... whether she should get an abortion or whether they should get married ... and I don't think a lot of people got that."

Which made the songs eventual transformation into a Sesame Street song encouraging children to develop a sense of pride extra weird.

What You Thought It Was About: The bittersweet combination of sadness and hope that one feels while looking for love at a bar.

What It's Actually About: Having a baby.

Explanation: All that bar talk about a bouncer kicking you out is actually just a metaphor for a baby being sent out of the womb and into the world. Don't feel bad for not catching it, though — singer Dan Wilson purposely cloaked the song about his impending fatherhood in ambiguous lyrics, because he knew his bandmates would be annoyed about having to play a song about his kids.

The lyrics only offer one clear hint about the song's real meaning: "This room won't be open 'til your brothers or your sisters come." Because the room ... is a uterus (hopefully one that doesn't smell like spilled Miller Lite and broken dreams, the way most bars do).

3. Red Hot Chili Peppers, "Give It Away"

What You Thought It Was About: Having sex. Tons and tons and tons of sex! With everybody!

What It's Actually About: The spiritual belief that we should give of ourselves in order to have a richer life.

Explanation: Yes, this song, which scandalized your dad so badly he turned off the car radio and yelled "You will not play this PORNOGRAPHY in my house," is actually about improving one's life through giving.

As singer Anthony Kiedis notes in his memoir Scar Tissue , a girlfriend once gave him a jacket of hers, because she thought giving things to the people she loved made her life better. "It was such an epiphany that someone would want to give me her favorite thing," wrote Kiedis. "That stuck with me forever. Every time I'd be thinking 'I have to keep,' I'd remember 'No, you gotta give away instead' ... Every time you empty your vessel of that energy, fresh new energy comes flooding in."

What You Thought It Was About: Love. You know, two becoming one? That's why it's such a wedding reception classic!

What It's Actually About: U2 singer Bono's tumultuous relationship with his emotionally distant father.

Explanation: A close reading of most of the lyrics ("You act like you never had love / And you want me to go without") shows that it's probably a bad call for your first wedding dance. Go with some John Legend instead, that guy's really an emotional open book.

What You Thought It Was About: Becoming disenchanted with religion. I mean, it's right there in the title! And then there's all that weird stuff with the angel wings in the video. Don't try to tell me I'm wrong on this one, too. I KNOW WHAT I SAW, AND I SAW RELIGIOUS ICONOGRAPHY.

What It's Actually About: Love.

Explanation: In 1991, R.E.M. singer Michael Stipe told The New York Times that the song was about "romantic expression," and that it's title was actually an old Southern expression meaning "being at the end of one's rope."

So sorry, high school atheists trying to antagonize your parents by blasting this. Maybe try some black metal instead. Those guys always say exactly what they mean!

What You Thought It Was About: Wonderfully intense romantic love (because you were 14).

What It's Actually About: Being stalked by a fan.

Explanation: McLachlan based the lyrics on a series of letters an obsessed fan sent her — in fact, she based them so closely on his letters that he briefly tried to sue her for songwriting credit.

What You Thought It Was About: Staying close to the people and places that are really meaningful in your life. Don't move to L.A. and forget about your whole family — just to try to get a small role on a CW show! Stick to the rivers and streams that you're used to!

What It's Actually About: H.I.V., drug dealing, and other tragedies that kill predominantly young people.

Explanation: Granted, even a cursory viewing of the video or skimming of the lyrics ("Three letters took him to his final resting place") would reveal this. But who had time to do that when you were practicing your dance to this for the middle school talent show?

What You Thought It Was About: Courtney Love (an idea that Courtney Love herself has definitely helped promote, claiming in a recent tweet at Lana Del Rey that the song was written about her vagina).

What It's Actually About: Children with cancer.

Explanation: According to Michael Azerrad's authorized biography of the band, Come As You Are, Cobain wrote the song about "little kids with cancer," describing watching infomercials featuring sick kids as "sadder than anything I can think of."

What You Thought It Was About: The end of an era. Like high school. Or ... high school. (Does anyone ever play this song for any occasion besides a high school graduation or the last episode of Seinfeld?)

What It's Actually About: Getting dumped.

Explanation: It's kind of an end of an era, but this song's about a split more jarring than just drifting apart from your friends over the summer as you prepare to go to different colleges. Singer Billie Joe Armstrong wrote the song about his girlfriend, who left him to go live in Ecuador. As he told Guitar Legends in 2005, "I was trying not to be bitter, but I think it came out a little bitter anyway ..."

What You Thought It Was About: Something ... uh, peppy! God, that guy is talking so fast, who can tell? But it sure is catchy!

What It's Actually About: CRYSTAL FRICKIN' METH.

Explanation: Winning the honor of "toe-tappingest song ever written about hard drug addiction," singer Stephen Jenkins conceptualized the song as a San-Francisco-themed answer to Lou Reed's song about New York City drug culture, "Walk on the Wild Side."

Of course, lyrics like "Doing crystal myth / Will lift you up until you break" don't make the song's meaning too much of a mystery, but given Jenkins' speedy, Barenaked-Ladies-style delivery, you could be forgiven for mistaking them for some uplifting gibberish. Plus, 90 percent of the time, you really checked out lyrically after the "doot doot doot"s, right? You can be honest, you don't need to impress me. I just spent the past five hours watching Goo Goo Dolls videos. I'm not very cool.

What You Thought It Was About: Uh, doombop, da da wooo bop, yeah yeah? (I have no idea)

What It's Actually About: How we use our time on Earth. And, um, God?

Explanation: According to Zac Hanson, an "mmmbop" is an extremely small measurement of time — a way to quantify all those blink-and-you'll-miss-them moments in life. The song is about "how so much in life is fleeting, and you've got to pick early on" what you're going to prioritize and focus on. You know, like brewing your own beer.Images: Mercury/ Polygram, Giphy

More like this
'Traumazine' Has Megan Thee Stallion Twitter Dancing Through Their Feelings
By Grace Wehniainen
Lauv Is No Stranger To Taylor Swift, Drake, Ed Sheeran, & Fame
By Alyssa Lapid
Demi Lovato's New Song "29" Hints At Their Age Gap From Ex-Boyfriend Wilmer Valderrama
By Jake Viswanath
Shakira Joked About An Early 2000s Video Of Her First Camera Phone Encounter
By Stephanie Topacio Long
Get Even More From Bustle — Sign Up For The Newsletter