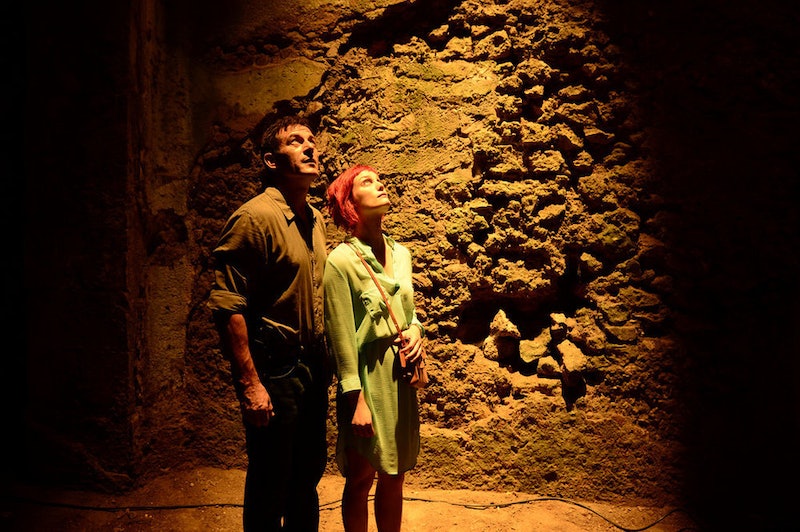 You've undoubtedly seen promotions for the historical mystery thriller coming to USA called DIG . The show — which follows a series of interwinding stories involving murder, conspiracy, cults, religion, along with a ribbon of history wrapped throughout — will not only leave you with a million thoughts and questions at the end of each episode, but keep you hooked as the action-adventure "event series" plays out over the course of ten episodes. Part of the mystery — notice the word "part," as there's so much more to the story beyond a murder — follows the mysterious death of a young American girl killed in Jerusalem while there studying an archeological dig. The audience is sure to find themselves in the dark during the series, which is exactly how the actors found themselves during filming.

"Tim and Giddy [Tim Kring and Gideon Raff, the creators of DIG] don't hand you out the scripts before they shoot, so we discover it as we go," series star Ori Pfeffer explained to Bustle at the world premiere of the show. Throughout filming, the cast wasn't privy to knowing where the story would take their characters, truly making the twists and turns that the series promises an authentic surprise.

"It's a great way to work for me, it keeps me on edge, not having to pre-think about what's going on," says Pfeffer of Kring and Raff's approach to filming.

Tim Kring and Gideon Raff are two people that know how to create suspense. Kring was behind Heroes, and Raff behind Homeland, so you can imagine the level of intrigue that the two can come up with together. That's what caught star Jason Isaac's attention. Isaac, aka Lucius Malfoy in Harry Potter, was drawn to the idea that "the person who created Homeland and the person who created Heroes were paired up together," Isaacs said during a Q&A at the world premiere. He was in immediately when he learned that they were going to "make a story about the most controversial piece of land in the history of mankind."

But the story vexed the cast a bit as they were relatively ignorant to where the story was headed — some of them even started to try solving it themselves. Alison Sudol (of Transparent, and also the band A Fine Frenzy) tells Bustle that there were certain things each individual actor knew, in order to understand what they were filming, but when it came to figuring out the whodunnit of the show, everyone was interested.

"You're trying to solve the mystery. You're going 'Who is it? What is it? Is it you? What did you do? Who are you?' Nothing is what you think it is," Sudol said.

"These writers are smart enough to know that they've got to give you a good yarn," David Costabile (of Breaking Bad and Lincoln) says of the creators. "It's a collision of fiction and the reality," he says, "being supported by this thrumming mystery."