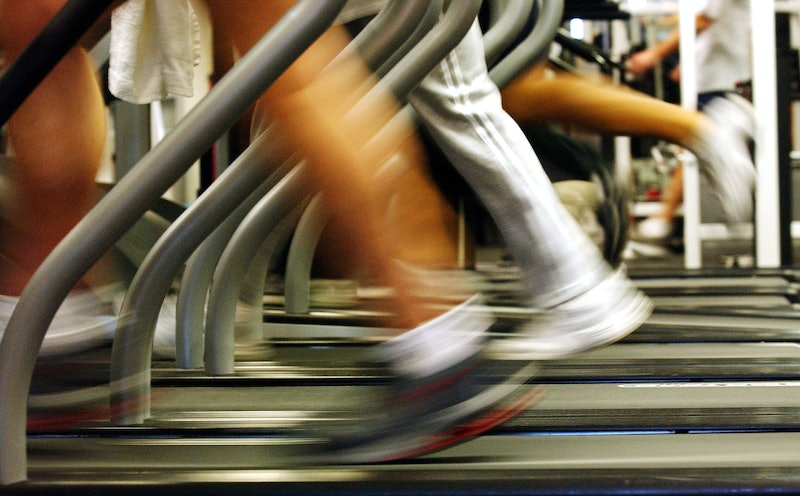 Going to the gym is one thing; running on the treadmill is another; but new data will compel even the most reluctant cyclist or yogi to get running. A recent study conducted by John Hopkins University cardiologists found that your treadmill performance could predict your risk of death — and quite accurately, at that. If how well you do on the treadmill might actually be able to predict how long you will live, you can bet that I'll be heading to the gym after work.

The correlation between physical fitness and life expectancy is already well known. Studies have shown that people who exercise regularly are healthier than those who don't; they also tend to have lower blood pressure, lower cholesterol, and reduced risk of diabetes, obesity, and blood clotting.Treadmill stress tests are also currently in use to predict the morality rates, but only for those with cardiac problems and in the short term. This new study, published in the journal Mayo Clinic Proceedings, uses the same type of data to find longer-term life expectancies of relativity healthy subjects — something that has never been done before.

For this experiment, researchers studied 58,020 adults, male and female, ages 18 to 96 years old. None of the participants had pre-existing heart conditions, and all were asked to perform an exercise stress test between January 1991 and May 2009. Researchers then used the stress test data and an algorithm to compute a FIT Treadmill Score, which factored in age, gender, peak heart rate and ability to tolerate physical exertion.

Over the course of the 18-year study, 11 percent, or 6,456 participants, died. Researcher compared FIT Treadmill Scores with data regarding which subjects had died to determine how their algorithm might have predicted mortality. The FIT Treadmill Score ranged from 200 to negative 200, with 200 being the optimal score. The study found that subjects scoring from 100 to 200 had a two percent chance of dying in the next 10 years, while scores of zero to 100 were associated with a three percent risk of death in the next decade. However, life expectancy was much bleaker for those who scored below zero to negative 100: They had an 11 percent risk of death in the next 10 years. The lowest scorers, from negative 100 to negative 200, were estimated to have a 38 percent risk of dying in the following 10 years.

The study also found that after considering gender and age, fitness level was the greatest indicator of death risk — more so than family health history or diabetes. Researchers hope that this study will bring to light the grave important of exercise and encourage patients who score poorly on a stress test to get in shape, as their life really does depend on it.

Now, while I believe that physical fitness is incredibly important to living a long, healthy life, I would be quite worried if a treadmill test has the final say on my life expectancy (running isn’t really my forte). So, to make myself feel a bit better, here are some other things that might predict how long you will live:

1. Your Friends' Rating of Your Personality

2. How Fast You Walk

Now this is a fitness test I am comfortable with. A 2011 study concluded that those who walk 2.25 miles per hour or faster lived longer than those who moved at a slower pace.

3. How Much Fruit You Eat

Eating more fruit could increase your life span remarkably. A 2014 study discovered that people who eat fruit at least once a day were much less likely to develop a host of deadly diseases and conditions.