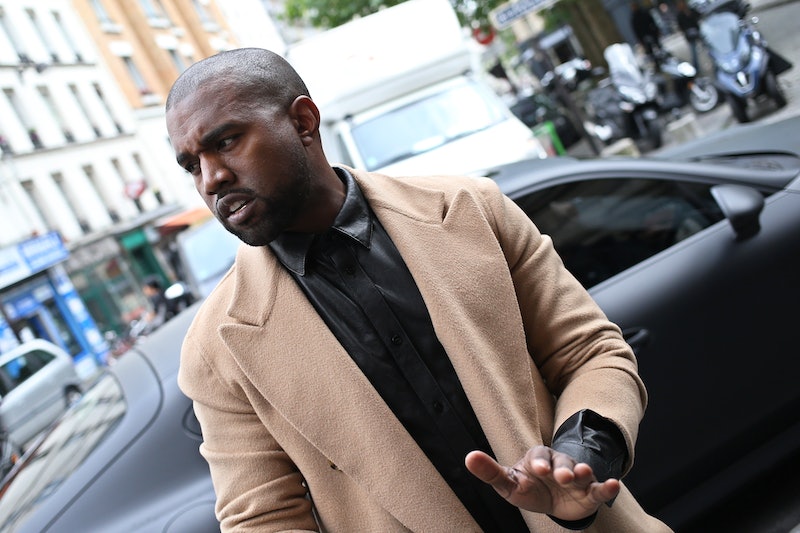 If you've ever heard Kanye West give a speech (or go on a rant during a concert), you know that he favors an Ernest Hemingway-esque, stream of consciousness type of oration (read: he kinda rambles and sometimes makes zero sense). One minute Kanye will deliver a shockingly insightful and poignant nugget of wisdom and the next he will call The Matrix the "Bible of the post-information age." No matter what he says, though, you can guarantee that someone, somewhere will probably take offense to it. On Tuesday, Kanye West gave a surprise guest lecture at Oxford University. Never one to bore a crowd, Kanye's speech touched on a variety of topics from the fine arts to Steve Jobs to his ego. At one point, he discussed his album My Beautiful Dark Twisted Fantasy, widely considered to be one of the top rap albums of the past decade (as Kanye never lets us forget).

During his MBDTF musings, Kanye spoke about the infamous track "Monster," which featured an outstanding performance by Nicki Minaj — which, if you recall, was the final push towards cementing her status as a hard-hitter in the rap industry. During this portion of the speech, Kanye made some comments that could be interpreted as sexist, as Buzzfeed noted in their coverage of the lecture:

You know, Chris Rock called my album My Beautiful Dark Twisted Fantasy [sic]…well, Chris Rock and everyone else at every single media publication called My Beautiful Dark Twisted Fantasy the best album of the last 25 years. This only came through collaboration......One of the most memorable things about MBDTF was Nicki Minaj, and the fact that she kicked my ass, on my own song, on one of the best albums…the best album – I’m just saying what the critics said – of the last 25 years. The best album of the past 25 years that I spent a year and a half making, out there. I was exiled from my country, it was a personal exile, but exile. To come back and deliver my magnum opus of a work, and to be outshined…to be beat by a girl, basically.

If we pause here and consider Kanye's words at face value, it is easy to see how one might interpret them as reinforcing "an unfortunate, sexist paradigm." Buzzfeed took issue with Kanye singling out the fact that he was outperformed by a girl rather than simply stating he was outperformed, no modifier. Buzzfeed contends that Kanye is fine with being outperformed by a male rapper, citing his reference later in the speech to Drake currently holding the top spot in hip-hop, but that what he "verbally addresses and takes up an issue with is that he was 'outshined by a girl.'"

It is no secret that sexism runs rampant in the music industry, particularly in the rap industry. The lack of a female presence in hip-hop has often been disrupted, but never fully righted. Nicki Minaj's success as a female rapper has been a landmark step towards gender equality in the rap industry, and I do not believe that Kanye's intention here was to take issue with being outperformed by a woman. He refers to being "outshined by a girl," but I would argue that he's not diminishing what she has done as a woman or what other female artists could do. The fact that Minaj outperformed him that early into her career makes it notable; the fact that she is a woman makes it empowering.

Kanye's discussion of Minaj continued as he noted the importance of his collaboration with her:

This was necessary. I think it was one of the most important points of working on that album, was to not stop her from her moment because of how good she is ... It was gonna work for her anyway, but let’s just say that in some way it helped give her exposure. She was able to go on and become a successful [sic], and fly, and run, and dream, and provide. And it was not locked because of my career...

... When I talk about collaboration and the creative process, the best idea wins.

Does Kanye often act and speak without thinking? Absolutely. But is he being sexist here? I don't think so. The point of this all is that in music, in any art, the masterpiece is the focus, not the artist. It's not about being beat 'by a girl' that makes "Monster" remarkable, it's about the fact that Kanye stifled his own ego for the good of the song, knowing that the infamously sexist rap industry would make a big deal out of it — an infamously sexist industry that is now being challenged by Minaj's widespread success and acclaim within it.

We are still in the early stages of women being serious contenders in the rap industry. Minaj's success, though, is a step in the right direction. Her recently released album, The Pinkprint,has been well-received by critics and fans alike, and Rolling Stone ranked The Pinkprint as the third best rap album of 2014. She's making strides as a woman in rap and acknowledging that does not necessarily make you a sexist.

We need not forget that this is still Kanye we're talking about. Even though he has a history of saying things that are controversial doesn't mean that everything that comes out of his mouth will be. Sometimes it's just Kanye being Kanye...

For the full transcript of the speech and many more Kanye-isms, see here.