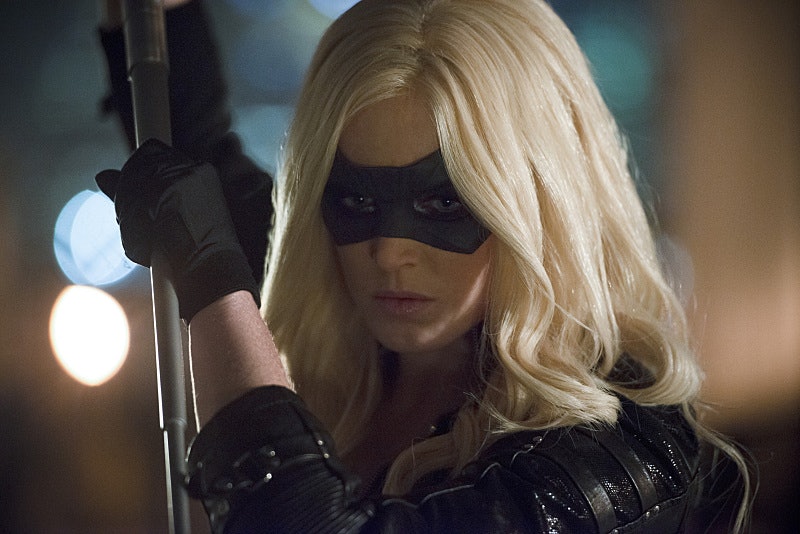 If you told me a few years ago that The CW would be bringing some of my favorite comic book characters to life in an awesome way, I never would have believed you. But now its 2015 and we already have The Flash and Arrow, as well as a new spinoff in the works. It was recently announced that an Arrow/The Flash superhero team-up spinoff was being developed at the network. What's interesting is who they have planned to headline the show. Ray Palmer/Atom, Captain Cold, The Flash's Dr. Martin Stein, and Caity Lotz, who played the now deceased Sara Lance on Arrow, are set for this new spinoff. But wait a minute — Sara Lance died. Who is Lotz going to portay in this new spinoff? Just because Caity Lotz playing Black Canary isn't mentioned in any of the announcements for this new spinoff doesn't mean it's out of the question. Could Black Canary be resurrected using the Lazarus Pit for this spinoff?

Arrow has already been giving Oliver Queen so many of Batman's storylines it is kind of ridiculous, with Ra's Al Ghul being one of the more glaring examples. By resurrecting Sara, the writers could do their own spin on another iconic Batman story— the death and resurrection of the second Robin, Jason Todd.

In the comics, Jason was the second Robin who was brutally killed at the hands of the Joker. He was subsequently resurrected thanks to Ra's al Ghul's surprising altruism and the Lazarus Pit. The only problem? Jason had been dead for months so he didn't quite come back as the same person. He was mentally unhinged to say the least, and became an anti-hero with very brutal means. Let's just say reuniting with Batman didn't go so well.

While Sara wasn't a sidekick to Oliver the same way Jason was to Batman, this storyline could work as the opening of the spinoff. Bringing back Sara Lance in such a dark way would also go a long way to better character development for women of the DC Comics Universe on The CW. Sara could go full-on villain for a while before deciding to right her ways as a hero and maybe take on a different name, since we can't have two heroes calling themselves by the same name. This would be going into very dark territory, even for Arrow, but we know the Lazarus Pit exists within the universe and if this happens, it will probably be Nyssa al Ghul who resurrects Sara (for obvious reasons).

It isn't unheard of for an actor to play a different character on a CW show after being killed off previously. But Sara = has become such a fan favorite as the first version of Black Canary that it would be pretty cruel to have Lotz return to the Arrow universe as a completely different character.

There's still a lot up in the air when it comes to this new show, which is still in its early phases. How does Captain Cold figure into everything when he is so important to the fledgling show The Flash? Will we see crossovers? What city will it take place in? But by far the greatest mystery is what will happen with Lotz. Let's hope the writers are finally able to develop the female characters on this new spinoff better than how they so often short change women like Iris and Laurel on The Flash and Arrow.