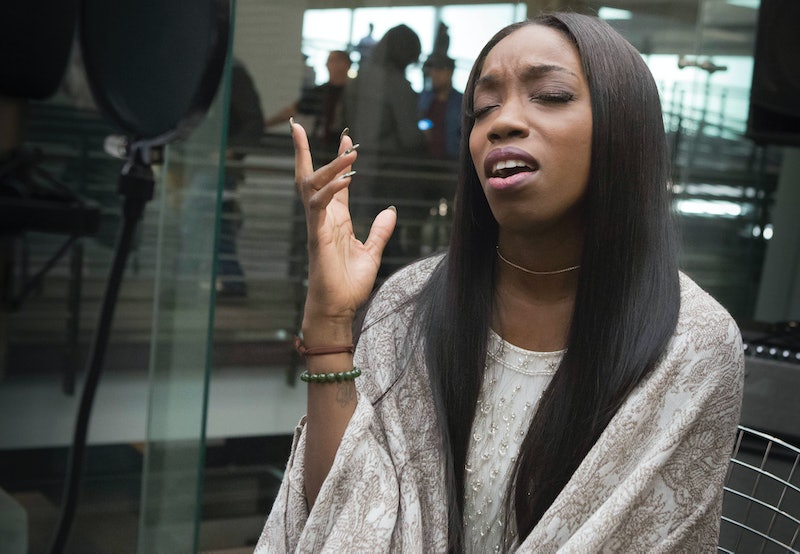 One of the best things about Empire is the way real musicians keep popping up on the show. (Not that Terrence Howard and Taraji P. Henson aren't real musicians — they killed "It's Hard out Here for a Pimp" in Hustle & Flow — but they don't have an album together or anything, even though they totally should.) The episode airing March 4, for example, will have Estelle stopping by to record a few songs, naturally. She'll play Delphine, an already established recording artist who strikes up a friendship with Jamal. But just who is Empire guest star Estelle? Surely you remember her from the dance floor (or at least one of her songs).

Delphine is Estelle's first acting role — though that might change in the future. "I feel like I wanted to expand my brand and do more of what I love doing, which is acting," she told The Hollywood Reporter. "I do a lot of videos, and in doing those videos, that's what you do: you're acting in those videos." But though you haven't seen her in a scripted series yet, you're probably familiar with her music. The West London-born singer/songwriter was the first artist signed to John Legend's record label, and she followed with a string of huge collaborations. Here, some of her best songs.

This song didn't hit the same heights as "American Boy," but it got around. If it sounds familiar, it's because it was included in Step Up 3D. The songs was also produced by David Guetta, and it was included on the reissue of his album One Love. (The reissue is called One More Love.) Say what you will about the song — it does inspire 3D dancing.

When Estelle sings on Empire, she'll be performing one of her own songs, from her new album called True Romance. "It was always absolutely this song," she told The Hollywood Reporter. "I think the producer had only heard this record, but it also made perfect sense; it's perfect for what [Jamal] goes through." Here is the solo version; you can see if you like it better as a duet with Jamal during Wednesday night'sEmpireepisode.