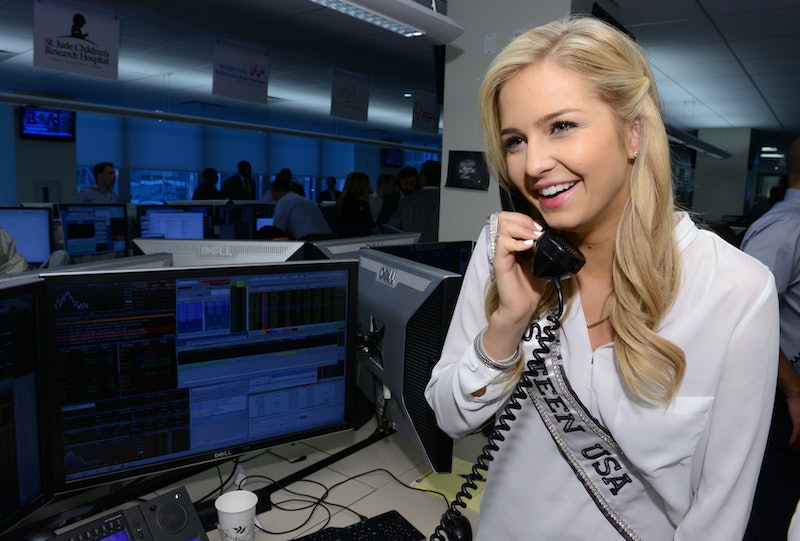 With Max Joseph gone for a string of episodes during Catfish's new season, Nev Schulman's gonna need all the outside help he can get. While no one can replace Max — in our hearts and Nev's — someone's gotta hold the comically tiny digital camera that the boys use to shoot computer screens. It's a tough job, but somebody's gotta do it. For Wednesday's episode, Catfish has tapped Cassidy Wolf, and she comes to the show equipped with her own social media nightmare. But first, where might you already know Cassidy from? The girl's a true pageant queen — she was crowned Miss Greater San Diego Teen USA, then Miss California Teen USA, and finally, Miss Teen USA back in 2013. Since then she's kept busy with her modeling career, and is an accomplished dancer. She's involved with the Joffrey Ballet in New York City, and was even invited to be a part of their Professional Trainee Jazz Program. Read: only really good dancers get into a program like that. This, however, isn't what sets Cassidy apart from other guest hosts — Cassidy is already no stranger the world of online secrets and lies. According to CBS, back in 2013, she was was the victim of "sexortion," which is basically a form of blackmail. Someone had hacked into her computer and gained control of her webcam, so they could watch her without her knowing it. Honestly, that's downright TERRIFYING.

This major creep managed to obtain a ton of illegal images and videos of her, and told Cassidy that he wouldn't release them to the public if in return she would do "special things" for him via the webcam. Oh, even more terrifying. Cassidy then started getting threatening emails, and that's when the FBI got involved. Getting in touch with the FBI is like 15 steps above turning to Nev and Max.

Cassidy suspected that it was a high school classmate of hers, and she was right. The FBI did some digging, and came up with the name Jared Abrahams. Not only that, but because of Cassidy's initial tip off, the FBI partnered with other bureaus from around the world and all together arrested more than 90 of these creeps hacking computers. As E! reported, Abrahams had hacked over 100 women and girls, and was sentenced to 18 months in prison.

Since this whole ordeal, Cassidy has taken up an awesome platform on cyber-crime awareness. Following her crowning as Miss Teen USA, she traveled the county explaining — and warning — the dangers of what can happen online when one least expects it. So yes, it is perfectly fitting for Cassidy to be showing up on Catfish now. What better place to explain the horrors that can happen online?