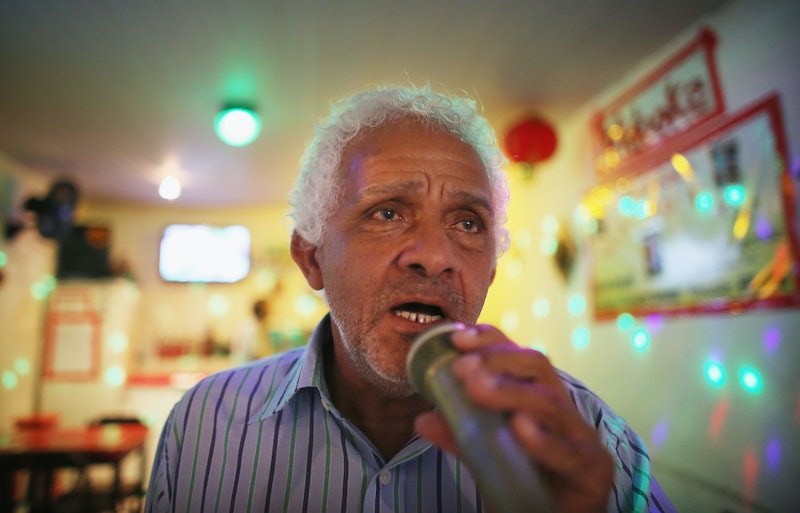 An easy way to learn who is worth eliminating from your life is answered in one simple question: "Y'all wanna go do some karaoke?" Those who vote yes are allowed to stay, while those who panic and run away should just keep on running. Karaoke is proof that we are improving as a species on this planet. It's an opportunity to take the mic and, with it, another persona completely. You can briefly set aside your identity as an accountant or person who's afraid of...anything, and embrace a new (albeit temporary) identity as a badass rockstar. Aside from being good, drunken fun, karaoke is escapism-as-therapy at its best. People who let fear or nerves prevent them from experiencing that kind of thrilling release are sorely missing out. Besides, if even Robert Pattinson can recognize the value of a good karaoke sesh, everyone should.

One song selection, despite the varying books and books of options in karaoke spots across the country, reigns as indisputable king: Journey's "Don't Stop Believin'". It seems an easy enough choice until you actually attempt and learn, well, it's super hard. First of all, it's long, clocking in just under five minutes. And in it, Steve Perry showboats his legendary vocal range, soaring through octaves impossible for regular humans to traverse. Regardless, that brave breed that do step to the mic and give karaoke a go seem to continue selecting "Don't Stop Believin'". After five years hosting karaoke sessions, Vanessa Resler (Baby Van Beezly) started to film the various attempts of the classic pick. The stitched-together result varies more intensely than Perry's pipes. And when you look at all the different kinds of people and groups who attempt this song, and the different ways they experience their karaoke moment, it becomes impossible not to regain a soft spot for this played out karaoke classic.

More like this
Christina Perri Reacts To Her 'Twilight' Song Being One Of YouTube's Most-Viewed Ever
By Radhika Menon
Madonna’s Reason For Directing Her Own Biopic Is So Madonna
By Maxine Harrison
Taylor Swift Calls Dwayne Johnson "The Man" After Revealing New "Taylor's Version" Song
By Jake Viswanath
Yes, You Do Know The Song From The 'Black Panther: Wakanda Forever' Trailer
By El Hunt
Get Even More From Bustle — Sign Up For The Newsletter