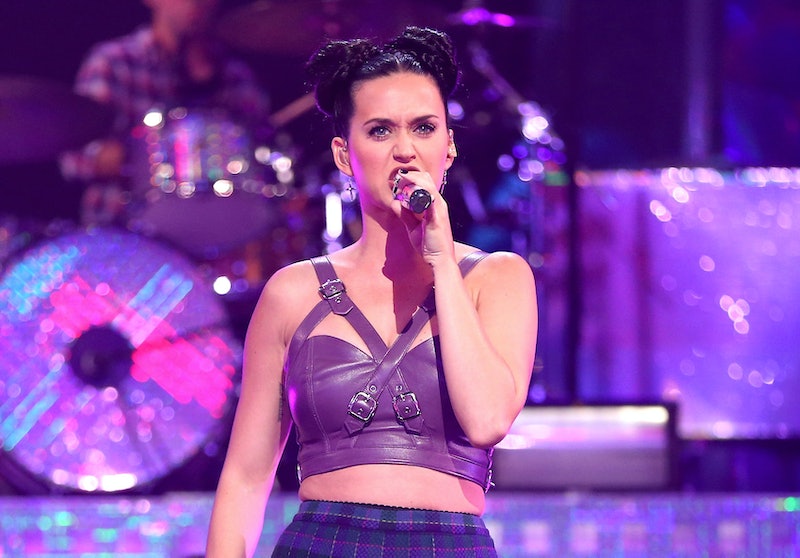 What one pop star calls an invasion of privacy, we call an Internet dream come true. Last week, video of Katy Perry and Robert Pattinson doing karaoke leaked online and no one could share the news fast enough. All over town, people raced to their rooftops to hoist up their "there's a video of Katy and RPattz drunk-sining Boyz II Men online!" flags and word spread like wild fire. Now, the "Roar" singer feels like she has to explain herself. During an interview with an Australian radio station, Katy Perry explains that karaoke video and, well, sort of gets mad at us for taking something sacred and turning it into a media frenzy.

Were the flags too much? The sky-writing was okay, probably though, right? Did we go too far when we fastened iPads to the barrels around the necks of Burmese mountain dogs and told them to spread the word? Too much? Too much. Got it.

Well, there's the media for you, nothing is sacred, not even karaoke. Yeah, no I mean, we were just hanging out and we have a lot of friends that we hang out, one of my best friends is a mutual friend of ours and we got wasted and did karaoke like people do.

Perry goes on to say that at least the video proves that they're "just friends," buuuut I don't know about that. It doesn't prove that they're together or not together — it just shows a lovely lady sitting on a man's lap singing about making love. Like people do.

But lesson learned, Katy. Next time an amazing video comes out that shows you doing some 'okes with fellow A-listers, we'll try to be a little less excited, but no guarantees. It's just too good! Ugh, we loved it. And hey, we'd offer up some iPhone footage of ourselves getting sloppy and singing our hearts out ("and I would do ANYthing for LOVE!") but without RPattz, it just doesn't feel the same.

Watch Katy Perry explain that whole karaoke video thing... and keep an ear out for how Australians pronounce karaoke. (Spoiler alert: it's phenomenal).