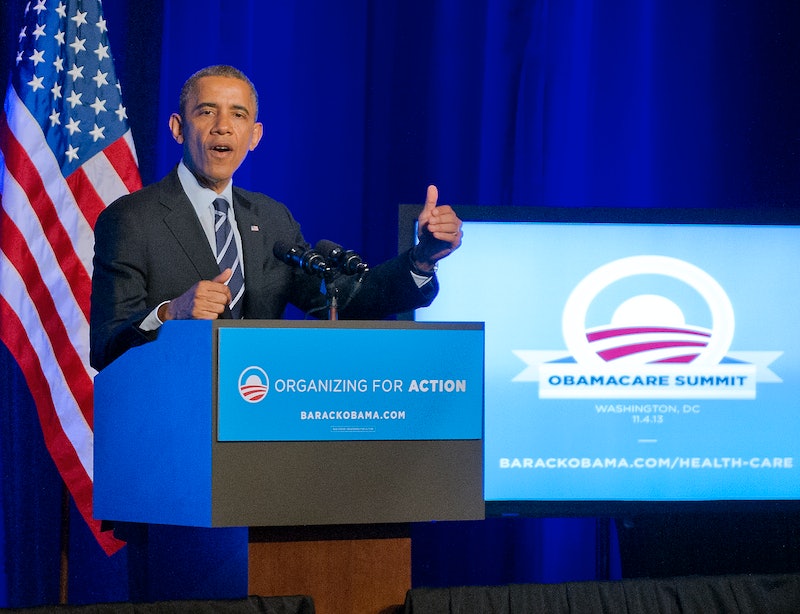 Right now, the U.S. Supreme Court is hearing King v. Burwell to decide whether states that did not set up their own healthcare exchange are eligible to receive tax subsidies through Obama's Affordable Care Act. If the court rules against subsidies in the federal marketplaces, which 37 states relied on instead of setting up their own, an estimated 9.6 million Americans could lose their healthcare coverage. Upon hearing the news, there is one question that is undoubtedly on many people's minds: Which states will King v. Burwell affect?

The King v. Burwell case is already being called one of the most significant Supreme Court cases in recent years, which is appropriate considering the scale of its consequences, but the entire case stems from some very fine print. The plaintiffs are arguing that the Affordable Care Act's text limits eligibility for the tax subsidies that help make health care affordable to individuals who enrolled through "an Exchange established by the State." The emphasis is on "established by the State." Four little words that could topple the country's entire healthcare system. Unfortunately, only 13 states, plus Washington D.C., have established their own state exchanges. The majority of states have not.

If the Supreme Court rules in favor of the plaintiffs, a decision that is expected by June or possibly July, the immediate effects would be disastrous enough, not to mention the long-term impact. Nearly 10 million Americans will no longer be able to afford their healthcare plans and therefore be forced to drop them. Millions of women will no longer have no-copay birth control, exams, and cancer screenings.

And in the long run, the sudden and massive loss of subscribers will force health insurance premiums to skyrocket, a consequence that will affect many more still and will be difficult to reverse.

But in the meantime, as the high court hears arguments from both sides, what Americans really want to know is: Will my state be affected and will I lose my affordable healthcare coverage?

Let's start out with the good news — the states that have set up their own healthcare exchanges and will not be affected by the Supreme Court's decision. These include:

There are also three states that originally intended to set up their own marketplaces but ended up relying on the federally run exchange — Nevada, New Mexico, and Oregon. It's not clear at this time whether these states will also be stripped of its eligibility, but it's definitely possible.

And here are the 34 states relying on the federal exchange that will definitely be affected by King v. Burwell: