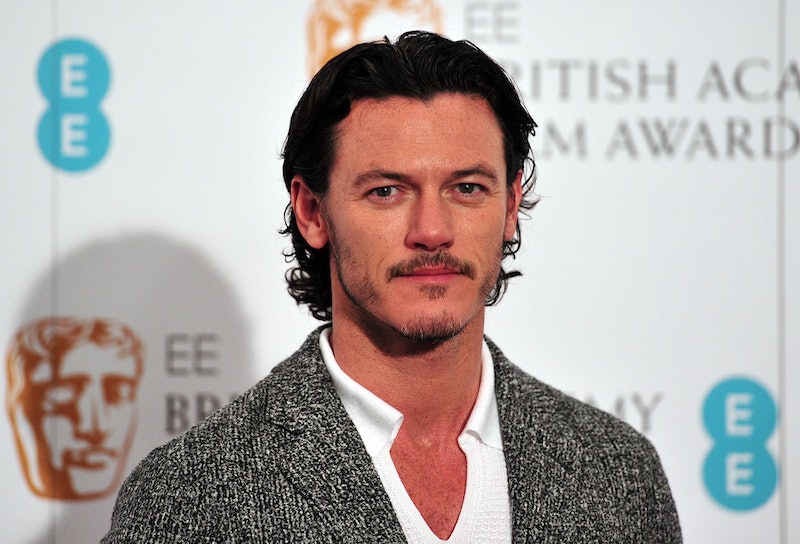 Thanks to the latest casting announcement for Disney's upcoming live-action adaptation of Beauty and the Beast, I officially grant myself permission to ballroom dance with an imaginary partner and wail — er, sing — aloud to Céline Dion and Peabo Bryson's rendition of the Disney film's theme song for the rest of the day. A month ago, Emma Watson announced her role as Belle and successfully bombarded everyone with cuteness overload, but now there's yet another exciting development — Beauty and the Beast's Gaston will be portrayed by Luke Evans, who's perfect to play the timeless tale's hunky, heartless villain.

Well, that warrants some good old-fashioned fist-pumping, doesn't it? Now that that's out of the way and my fingers are unclenched and prepared to type, it's time to get down to the business of highlighting the various reasons Evans is clearly the perfect actor to portray Gaston.

Based on Gaston's description, he has a reputation as a conceited bad guy and hunter, which is clearly a dangerous combination. Nothing that I know about Evans' background suggests that he has very much in common with this character, but given his prior acting experience, I'm fully confident that he'll breathe the necessary elements into his Beauty and the Beast role.

Here's why Luke Evans perfect for Gaston in Beauty and the Beast:

He's Good at Playing the Villain

Being the bad guy is nothing new to Evans. I mean, he wasn't the nicest dude in the Fast & Furious 6 or when he portrayed perhaps the most notorious fanged villain in history in Dracula Untold.

He Has Fantasy Film Credentials

If Disney's Beauty and the Beast reboot is indeed a musical, Evans' professional singing background will obviously serve him well in his portrayal of Gaston.

Gaston is Quite the Looker, And Well...

So is Evans, especially when he's acting shy.

He's From the UK

Actually, Luke, this is great. If anything, this minor common ground with co-star Emma Watson could be a bonding point that just might help with onscreen chemistry, just in case you're both a little scared, or neither one prepared. Images: Giphy (3);thereallukeevans/Instagram (2)

More like this
An Extremely Messy Ranking Of What Actually Happens In 'Don't Worry Darling'
By Chloe Foussianes
Paul Mescal, Man Of Mystery
By Samantha Leach and Heather Hazzan
Twitter Has So Many Thoughts About ‘Don’t Worry Darling’ After Its Release
By Stephanie Topacio Long
Florence Pugh Reflected On Her ‘Don’t Worry Darling’ Experience On Opening Day
By Brad Witter
Get Even More From Bustle — Sign Up For The Newsletter