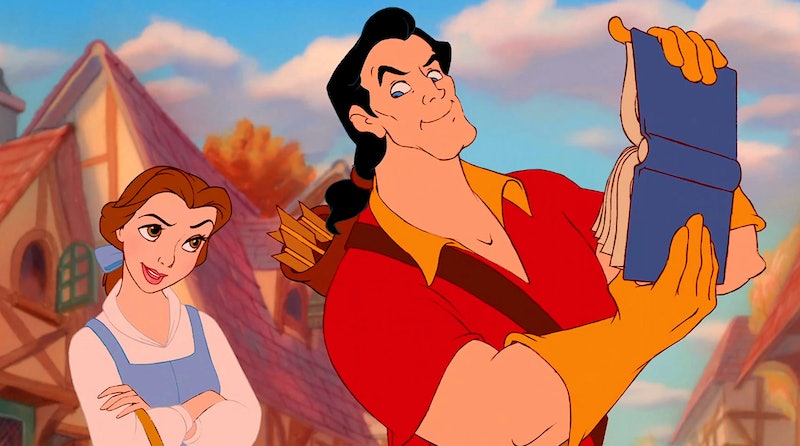 Belle from Beauty and the Beast is a bookworm, and in the upcoming Disney live-action film Belle will be played by Emma Watson a.k.a. celebrity feminist icon and possible future princess. That's why I know that both Belle and Watson would share my concern about whether or not Beauty and the Beast will pass the Bechdel Test. The thing is, the 1991 film only had two main females of character (four, if you squint) with names — and three of those four were cursed into the form of objects. There was even a trio of women in Belle's village that had no individual names; they were simply called "The Bimbettes" or "The Silly Girls" and their role was to fawn over Gaston whenever he showed up. Yeah, Beauty and the Beast wasn't exactly a feminist dream when it came to strong relationships between female characters.

Now that Luke Evans has been cast as Gaston and Dan Stevens has been cast as The Beast, the film has the main trio that make up the center of the film bolstered by supporting characters: our protagonist, her love interest, and our antagonist. However, here is where I want to see Disney take the fork in the road to the path less traveled. Yes, there are still all the cursed servants and Belle's father that still need to be cast, but what about Belle's friends? In the original fairy tale, Belle had sisters. What about them?

I know the entire point of Belle prior to going to Beast's Caste is that she's dissatisfied with the world outside of her books — but isn't that true of all of us? No matter how many friends we have, or how supportive our families are, the world of books are an escape from the aspects of our lives that aren't as ideal as they could be. Belle's role as an independent bookworm doesn't mean she can't have at least one friend in the village, one female friend she can talk to, read with, walk with, and who can take care of her father when Belle trades her freedom for Maurice's. And just because the original Disney movie cut the roles of Belle's older sisters doesn't mean the live-action remake can't bring them back, and have them undergo character development that strengthens their bond with Belle. Imagine Belle's whole family staging a rescue attempt, especially if she thought prior to this that her sisters liked each other more than they liked her. Aww.

I am not undervaluing the importance of Belle's relationship with Mrs. Potts, or Mrs. Potts as a character, but there can be more than four females with names (if The Wardrobe counts as a name) in this story. Belle can have bonds with more people than simply her father, even if her father is her closest and most important relationship. And even the shyest bookworm who feels the most out of place can have at least one friend who makes them feel like they aren't weird and aren't alone. Not only does Watson's Belle deserve to have that, but the next generation of Belles deserve to know that they can have that as they grow up and escape into their books.

Just like Frozen taught us that no love is more important than the love between family, so too could live-action Beauty and the Beast teach us that family and friendship make you just as strong as adventure, romance or possessions. That's a lesson both Belle and the Beast could learn.