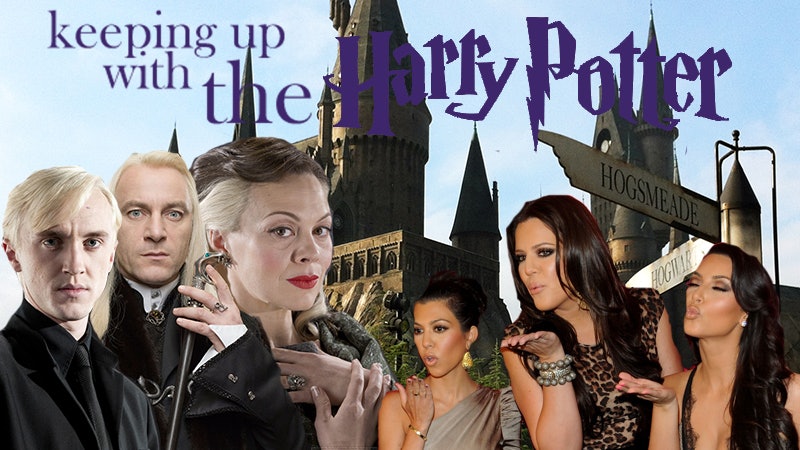 By now, you've probably seen it, and if you haven't, be assured that it's only a matter of time. The ever Internet-breaking Kim Kardashian has gone platinum blonde, and by the end of the day, you can bet that there will be a million tweets, articles, and thinkpieces about why she did it, what it means, and — most importantly of all — who she now looks like.

While some may believe that Kim's hair reminds them of Debbie Harry, and others may argue that it's actually reminiscent of Tilda Swinton, I think we all know who really inspired the new do: none other than Harry Potter's Draco Malfoy, boy wizard and one of the most famous platinum blondes in literature and film.

I mean, just look at it — the color, the angles, the don't-mess-with-me expression on Kim's face. It all screams Draco, and really, that should be no surprise; even before the hair change, Kim was eerily similar to the Potter villain. In fact, many members of her family have surprising connections with characters from J.K. Rowling's beloved series, from Kris to Kendall to Bruce. Don't believe me? Here's how the famous clans stack up:

It's not just the hair (although it certainly helps). Like Draco, Kim is all about getting ahead and making a statement. She's the leader of her gang, a lover of drama, and her family's biggest defender. And, like Draco, there are more sides to her than what the public typically sees; remember those KUWTK episodes where she almost adopted several dogs/children because she felt so bad? Kim and Draco might love attention and getting their way, but neither of them are truly terrible people.

In Harry Potter and the Deathly Hallows, Narcissa lies about her actions and risks major consequence in order to protect her family. This is basically what Kris Jenner does all the time. No matter what wrath they might face from their peers, the press, and even their own family members, these strong-willed women always do what's best for their tribe.

The youngest of the group, Kylie is often overshadowed by her siblings, but lately, she's been surprising everyone by making a name for herself. She's rebellious, moody, and hungry for fame, qualities that Ginny Weasley, she of "I'm gonna date the Boy Who Lived because my family ignores me and I'm bored AF" fame, knows all too well.

Like Ron, Rob gets teased by his many siblings, is often down on his luck, and displays some weird sexual jealousy for his sister when she starts dating his friend. It's a perfect match.

Ignore the Ginny-Harry thing and just focus on the characteristics. Like Harry, Kendall has a ton of pressure on her, due both to her family's fame and her own ambitions. She was kind of left on her own for awhile, which allowed her to formulate a plan for getting out and spending as much time away from her caretakers as possible. Now that she's a model, she has to prove that she's more than her famous last name, while also dealing with her own inner demons about living up to her legacy. And the press are always writing mean things about her! It's a tough life, and one that Harry Potter can completely understand.

Khloe often feels like the odd one out of her gang, the sister who's technically part of the group but isn't treated with as much respect as the others. Hagrid, anyone? Also: both people love a good prank, are a little emotionally immature, and, despite good hearts, can be a bit too hot-headed for their own good.

Like the Weasley patriarch, Bruce Jenner is the mild-mannered counterpart to a loud, commanding wife. He's respected for his career, but because it's rather boing, he's often forgotten about in the excitement over the lives of his children or their friends. He's the family pushover, but he's kind of okay with that, because getting ignored allows him to spend far more time than he should watching Quidditch and playing with his toys, including his expensive, rare collection of flying vehicles.

Both ladies have a ton of kids and a partner who's always getting in trouble. More important, however, neither of them take crap from anyone, and while their sarcastic tones and constant nagging might seem mean, it's really just their way of showing how much they care.

Unlike the others, Scott isn't a true Kardashian or Jenner. Hermione, meanwhile, is from a Muggle family, even though she associates mainly with wizards. Scott is full of witty quips and smart observations. Hermione is the number one student in her class. Scott always wears suits and loves looking sharp. Hermione is a perfectionist who might not always be dressed up, but can certainly throw an outfit together when needed. Scott is loved by all fans, but unappreciated by his fellow cast members. Hermione is one of Potter's most adored characters, but her friends often don't give her enough credit. Do I need to go on?

For years, Kanye only showed one, kinda-awful side of himself, but recently, he's proving that he's much more than just a self-centered jerk. Still, no one's quite sure what to believe, as he keeps contradicting himself whenever someone gives him a chance to speak. And then there's the whole authority problem, and the love of black, and his years-long obsession with a woman who wouldn't, at least for awhile, give him the time of day. Sound familiar?