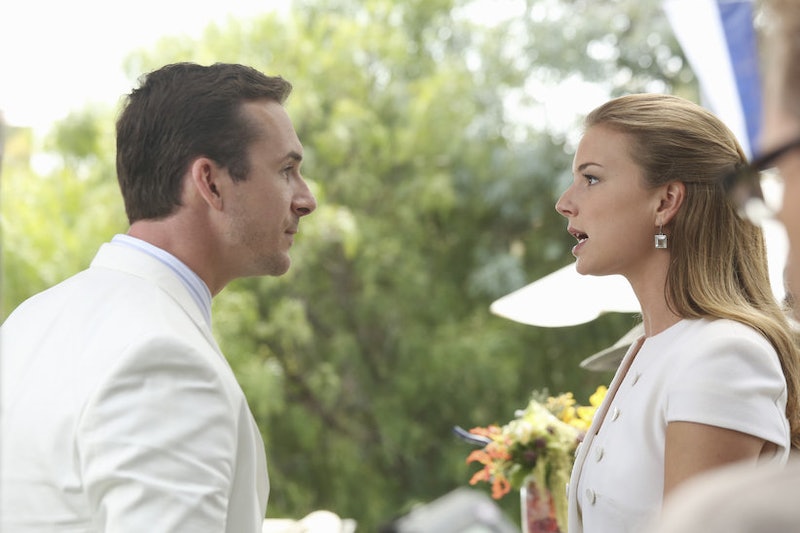 In Sunday night's aptly titled episode, "Confession," ABC's Revenge revealed the answer to the question we've all been asking ourselves for the past three weeks: Why is Aiden back in the Hamptons? It turns out, as some of us suspected, that he and Emily Thorne are in cahoots... AGAIN. Joke's on you, Victoria. So all of that supposed "help" he's been giving Victoria for the past two episodes of the show's third season was carefully planned out with the same "girl next door" they're supposed to be "taking down." Touché, Revenge — you got us and apparently Victoria too.

The best part about watching Revenge is trying to guess everyone's next move because, really, that's all the show is: a character-driven chess game. Emily Thorne moves a diagonal three spaces to the left in hopes of a checkmate, Victoria Grayson moves three spaces to the right, Daniel Grayson moves in a L-shape and cuts one of them off (depending on who he believes is conspiring against him at that moment).

In last week's episode, Aiden clued Victoria in on the fact that Emily purchased the $10 million beach house that Nolan Ross is living in and insinuated that she also might be in possession of the Grayson fortune. He also let slip that he and Emily maintained an affair during the early part of her engagement to Daniel. Naturally, Victoria took this information and went on a true-to-form rampage (the likes of which she seems to have passed down to both of her children). She goes to Daniel's fancy new office and plants the seeds of doubt about Emily because of course she would. Daniel, who's convinced that his mother is the devil for the 100th time, thinks she's just stirring up trouble like the crazy woman that she is and brushes her off because he and Emily already "talked" about Aiden. Of course you did, Daniel, but did she tell you the truth?

In another typical Victoria move, she thinks that Nolan's housewarming (or best pool party ever) is the best place to debut her new friendship with Aiden. She's got such a flair for theatrics. Emily and Aiden play off their surprise to see each other so well, I was honestly fooled into thinking that maybe he was actually working with Victoria. But just kidding — they're just really good at this game and know exactly how to hide the fact that they're in love/will forever be working together. They get into a pretend fight, Daniel uselessly steps in (of course), and the show goes on.

Daniel has gotten progressively bitchier as this season goes on. I know it's early in the season and that may not be the most appropriate description, but it's kind of true. His insecurities about Aiden are off the charts, considering he installed an alarm system in Emily's house at the mere mention of his name. He also felt the need to kind of brag about shooting Aiden during last season's finale. This is not a pissing contest, Daniel — especially when you are neither of the two men that Emily truly loves. Installing an alarm system in a house that isn't even yours without asking your fiancé's permission is pretty bitchy, Daniel.

Aiden's "confession," so to speak, telling Emily that, "Victoria took the bait," definitely means that they're working together. There's no denying it. Here's the thing about Aiden though: Emily really turned the tables over on him. She's also responsible for the death of his sister — that's something that he'll never be able to forgive her for. He came back to help her finish this, but I can't help but wonder how long it'll take for that elephant in the room to cause a dramatic plot-twist or how he'll take it when he realizes that her urgency to end this is for Jack, not him. Aiden and Emily may still think they "love each other," but he has to love her at least a little less after all the shit she pulled last season. I really want to trust Aiden, but their relationship has been way too dysfunctional and erratic in the past for this. Emily's reaching the bottom of her list of victims — she'll have to stop hiding behind them and choose one of the eligible bachelors she's been stringing along once and for all. For real this time.

On a side note, we cannot leave this week without acknowledging Nolan Ross' epic style choice for his housewarming party. Ahoy!: