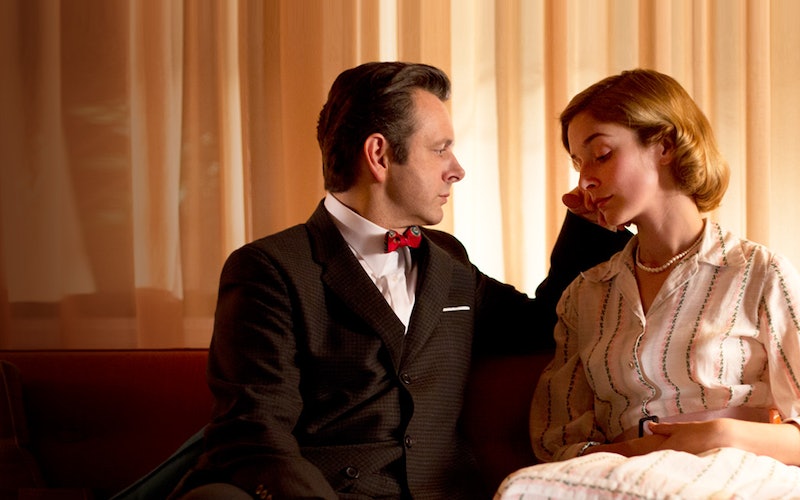 In 1945, William Masters had much more curly hair and was studying the "courtship ritual" of rabbits. (Fun fact: male rabbits apparently pass out right at the moment of climax.)

And just like how rabbits, birds, and bees are the primordial metaphors for sex and copulation, Masters of Sex still adheres pretty closely to our cliched image on life in the 1950s — bow ties, shocking lack of knowledge, and sexism. But part of the charm and brilliance of Mad Men is in how closely their work approximated today. We still want more or less the same things out of a fast car, a vacation, or a can of beans.

Now, that cliche gets applied to Masters's work. After a failed relationship as a curlier-haired man, he says, "What if we could understand the basic physiology beneath all that bullshit." Rather than you know, the feelings, because he is a man of science who has trouble understanding people's emotions.

Flash forward to February 1957 in St. Louis where he's with a patient who is not yet sexually active but getting married soon. However, she has three semesters left of college and wants to finish — she isn't sure her husband's income alone will be able to be enough, it seems.

So there is the talk about contraception. "Do you know how to apply a condom?" Masters brusquely says while demonstrating on a phallus. She looks aghast and horrified. "There are other options — creams, jellies."

The girl looks shocked. While discussing a diaphragm fitting, she asks, "And my cervix is where?"

This all seems very quaint and cute. But especially for a well-educated woman in a major city, even in midwestern St. Louis, it seems suspiciously glib. While it was illegal in some states still to sell contraception or for a couple to use it, Americans are spending an estimated $200 million a year on them in the 1950s, with condoms being the most common choice. By 1951, there were already 200 Planned Parenthood clinics. But you would never know that from the episode.

Mary McCarthy's The Group was published in 1963 and was quite scandalous at the time, it depicts a group of eight Vassar grads from 1933 to 1940 — one of whom shortly after college goes to New York's Margaret Sanger clinic to get a diaphragm. While the pill had not yet been approved for contraceptive use in 1957, it seems hard to imagine that all other methods of birth control were so unknown to women.

Next we're in the brothel where the study encounters faked orgasms, women who can't orgasm, and a girl who's into being slapped. One of the prostitutes says she associates sex with anchors, per her uncle. She was raped by him. "You want to talk about sex, he's the one you ought to talk to. He taught me everything I know."

And there are male subjects! Gay male prostitutes to be exact who Masters say are three deviations from the norm, scientifically speaking. "We're so far from the bell curve we can't even hear it ringing." And a double-speak of hiding in plain sight as something both gay men and sex researchers have to do continues through the episode with flashbacks and visits.

Betty goes into surgery to be able to have babies. Her fiancé is there, sweetly supportive if a little awkward with a bouquet but of course, there are jokes, "At least the girl is comfortable on her back" says one of the surgeons who is promptly booted out.

Sadly, the tube-tying-reversal doesn't work, but Betty tells Virginia she won't tell her Pretzel King. "You want to get somewhere? You have to hitch your wagon to a man," Betty says. (Also, that Masters is in love with her.)

A new female OB-GYN gets put in with the secretaries. She's icy to Virginia. And we're reminded of the sexism in the world when a secretary says, "I don't care where she went to school, no lady doctor is looking up my skirt."

Virginia tells poor put upon Libby about Bill's abysmal sperm count but she gets pregnant. Hurrah!

And Masters, in a last play to get his study back into the hospital, tells the Provost that "the men who see [a male prostitute] are family men, suffering in the shadows… If not for my sake, then for the men in the shadows," which seems to imply that the Provost might be one such man.

Flashback to the Provost getting Masters the job at St. Louis. How do you pay back favors? By moving your sex study back into the hospital and oh, delivering some quadruplets and posing like you ate some bad tuna salad in front of the press.