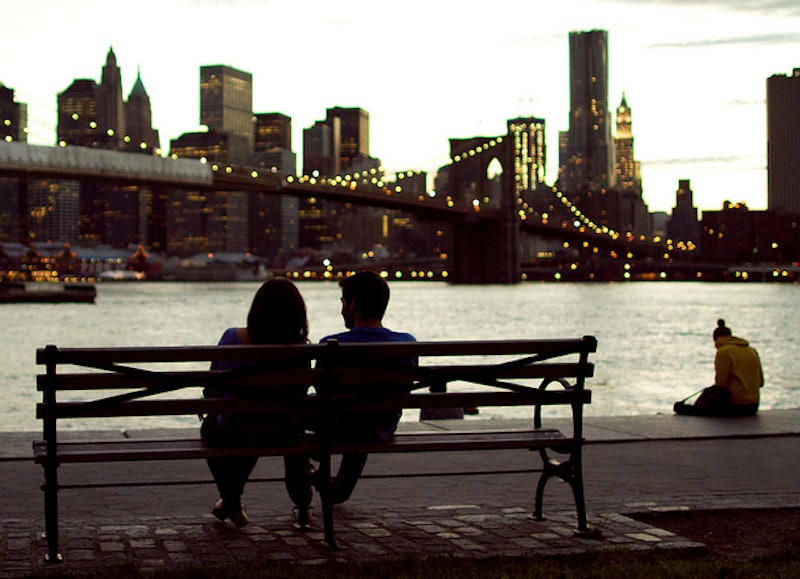 I used to be the kind of girl who always thought that guys should pay on dates. When I was in my twenties, I’d commonly give my friends advice like, “If you have to pay on the first date, then forget him. He’s not worth your time.” When a guy paid, it meant that he liked me, and how much he liked me was directly related to how much he paid.

I didn’t just hold this expectation for the first date, either; I expected the guys I dated — whether we were on our second date or in a full-blown relationship — to pay for everything, all the time. Sure, I’d offer now and then, but if they accepted, I judged them. What kind of man makes his woman pay? How dare he!

It makes me cringe to remember it. Now in my thirties and happily married, I find myself with very different views on money. My husband and I each make our own money, and when it comes to shared bills, we each pay half. We still like to treat each other now and then, because it can be a nice gesture. But fairness is a big deal to us, and we never lose sight of it.

But getting here was not easy. As an educated, self-proclaimed feminist with money in the bank and a good job, how did I justify expecting men to pay for things for so long? I had to examine what was really going on regarding my expectations of men. Looking at the facts, I realized that it's not fair to make the guy pay all of the time. If you think guys should always foot the bill, here are five reasons to reconsider.

1. The Old Way Is Not Always The Best Way

When I was single, one of my favorite justifications for not reaching for my wallet was: that’s just the way things have always been. After all, my father was the provider in my family, and my mom didn't work. To apply this line of thinking to my dating life, I had to overlook the fact that my mom and dad married when my mom was just 19 and my dad was 22; they had two kids within a space of a few years, and my mom raised us kids while my dad worked.

My situation was quite different —I was not even close to being in the kind of long-term, committed relationship that can require in-depth financial discussions or compromises. It seems pretty inappropriate to start shirking financial responsibilities while casually dating someone. It was helpful for me to consider the whole picture, and ask myself if I really wanted to emulate the past — or if I was on a different path.

2. Not All Men Offer To Pay Because They Want To

What if the guy always offers to pay? I had often told myself that since many of my boyfriends offered to pay every time, then they must actually like paying for me. They had made their choices — so why shouldn’t I reap the benefits?

But guys, like women, are also battling against social expectations of their behavior. If a guy insists on paying the bill, it might not be because he just enjoys paying. Maybe his parents had the same dynamic as mine, where their father paid for everything. Maybe he has all sorts of warped ideas about money and masculinity, like that he's less of "a man" unless he makes X amount of money, has X kind of car, works at X kind of job, etc. He might be doing it because it is what is expected of them. Never questioning the "guy always pays" dynamic can open the door to a whole range of relationship problems, including frustration, or worse, resentment.

True, guys have the power to make their own choices. But if you care about your guy, why not have a compassionate chat about it and let him know you won’t like, love, or respect him any less if he wants to be taken out to dinner one night?

3. Not Every Woman Makes Less Money Than Her Partner

I'm not denying the fact that women are paid 22 percent less than men for the same jobs. I, too, got as excited as Meryl Streep about Patricia Arquette’s speech at the Oscars pleading for equal wages. But I’d be lying if I said that I’ve personally experienced such inequality. In many cases, I made even more money than my partners.

But because I'd long equated how much a guy paid with how much he liked me, I allowed myself to be flattered by his offers to pay for me, instead of embarrassed with my acceptance of them. Wow, he must really be into me!, I'd think. Sometimes, I'd attempt to make up for it all by buying expensive gifts for birthdays or Christmas. But day-to-day expenses add up, and if I compared my expenses with theirs, it's clear to see that I was a straight-up freeloader.

Though I care deeply about the pay gap, will scoring a few free meals really fix anything in the long run? It seems to me that expecting men to pay is a counter-intuitive approach to evening things out. If men continue to pay for everything and women continue to expect it, won't this set-up simply justify the need for men to earn more? If they are still seen as "providers" with all these extra expenses, well, then, the pay gap makes sense. And I'm not comfortable with that.

4. You Wouldn't Expect Your Friend To Pay

One of the big reasons that many women may feel OK with not paying on dates is that love interests are not seen as friends. Dating is often seen as something transactional, where money is used to convey someone's intentions and feelings of connection. This is very different from the way we interact with friends, where we use communication to express connectedness.

Now, I like to think about it this way: would I make a friend pay for me in order to prove that they liked me? Relationships are simply romantic friendships. When you make a new friend and you decide to go out for coffee or a movie with this friend, do you expect them to pay? I think not.

5. Expecting Men To Pay For Everything Isn't Exactly Feminist

The biggest problem with expecting a man to pay the bill because that’s just the way things have always been is that so many other things, including dating itself, are not the way that they used to be. You can’t hold on to a few select traditions from an unjust bygone era without taking on all of the traditions. Just because we may not like spending our hard-earned dollars doesn’t mean it’s unnecessary. Paying for ourselves is part of being smart, independent, capable women.

I realized that if I wanted to be in a relationship where power was equally distributed, where respect was mutual, where each person in the relationship mattered and had value as a human being, then I had to shift my perspective about what paying for things meant. By expecting a man to pay simply because he is a man, I was inadvertently maintaining a history of repression, where men are viewed as in control and we women are still viewed as helpless.

But we’re not helpless. We never were. Paying for myself makes me feel good about myself and my situation, because I know it means that I'm part of a healthy, mutually respectful relationship. Nobody is being taken advantage of. We're not living in some past, using an outdated definition of what a relationship should be or should look like. We're living in the present — which can be much brighter, much more fun, and much less expensive in the ways that really matter.

More like this
The Top Mistakes Scorpios Make In Relationships (& How To Avoid Them)
By Nina Kahn
What Is Brad Pitt’s Net Worth? The Bullet Train Star Now Makes 8 Figures Per Film
By Hugh McIntyre
Gemma Collins' Net Worth Is Only Going Up
By Catharina Cheung
What Is Beyoncé's Net Worth? The 'Renaissance' Hitmaker Makes 9 Figures On Tours
By Radhika Menon
Get Even More From Bustle — Sign Up For The Newsletter