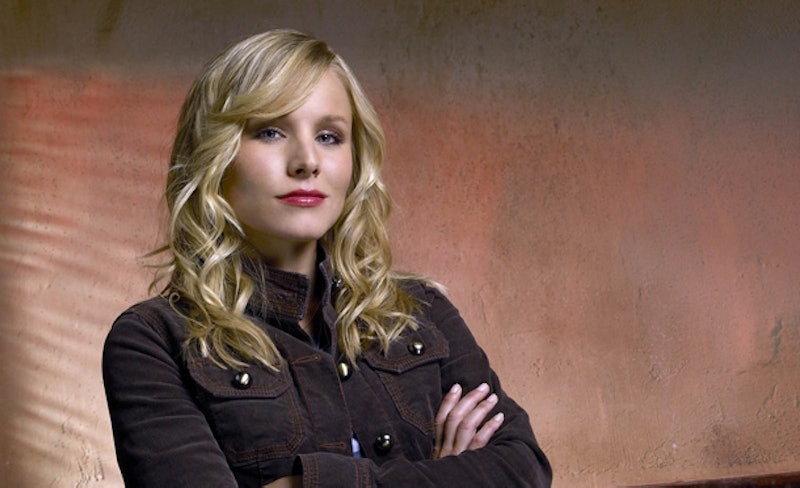 If sarcasm is a virtue, then Veronica Mars (of Veronica Mars, of course) was Santa Claus. Though she was known throughout Neptune for being a teen sleuth, Marshmallows regarded Veronica Mars more for doling out sick quotes, one-liners, and comebacks without batting an eyelash. Kristen Bell's snark game is truly aspirational so when I'm drained for something truly witty, I look to that flaxen-haired powerhouse. And the next time you're confronted with some 20-something problem, you should too!

We missed the bulk of Veronica's twenties, with the series' cutting out after her first year of college. When she reappears in the Veronica Mars film, she is poised, stone cold, and still fielding remarks with a "well-played." "The sex tape? No need to be coy," she delivers while being questioned in a job interview. Damn, girl. Though it's likely that after leaving Hearst College she ended up considerably more put-together than any of us, we can still look back on the incredible, smart-ass comments of her teen years to help us get through day-to-day annoyances.

So that's why I've collected eight of her sassiest one-liners that you can use for every situation. Make sure to bookmark this article so you'll always have these gems at hand.

1. When a customer at your day job orders a "half caff soy vanilla frappe-latte with two pumps of raspberry syrup and vegan whipped cream":

2. When some jerk insults your latest article on Twitter:

You are a published 24-year-old goddess, you don't deserve that kind of treatment.

3. When you're at a family reunion and relatives are asking what you're doing with your life:

You're FINDING YOURSELF, OMG.

4. When your date is furious because they overcharged you an extra margarita at Outback Steakhouse:

It's $5, you'll just ask the waitress to remove it off the receipt, it's not something to punch someone over. Again.

5. When your friend talks about how Jared from last night's party texted her back:

Never mind the fact that you spent half of the night laughing at Jared's dumb jokes, but whatever.

6. When someone remarks that you're drinking up a storm tonight:

Don't condescend to me just because I'm having a good time, it's Friday and you're ready to let loose. Let's order another round of fireball, amirite?

7. When your boss gives you a big compliment:

For every mystery solved out of good will, there were plenty done to make side money. You don't want to sell your talents short. Praise and gold stars are lovely, but they don't pay the rent.

8. When you get caught breaking the rules:

I don't recommend committing any felonies, but this sassy line could maybe get you merely a slap on the wrist the next time you someone catches you nursing a flask. Or it could get you arrested, either/or.

More like this
Kim Kardashian Father’s Day Tribute To Kanye West Called Him “The Best Dad”
By Stephanie Topacio Long
Dan Levy’s Father’s Day Pic Of Dad Eugene Spoofs The ‘Schitt’s Creek’ Vet’s Past
By Grace Wehniainen
Prince William & His Kids Are Adorable In A Smiley New Photo For Father’s Day
By Stephanie Topacio Long
Adele’s All-Female Lineup Includes Kacey Musgraves, Mahalia, & Self Esteem
By Shahed Ezaydi
Get Even More From Bustle — Sign Up For The Newsletter