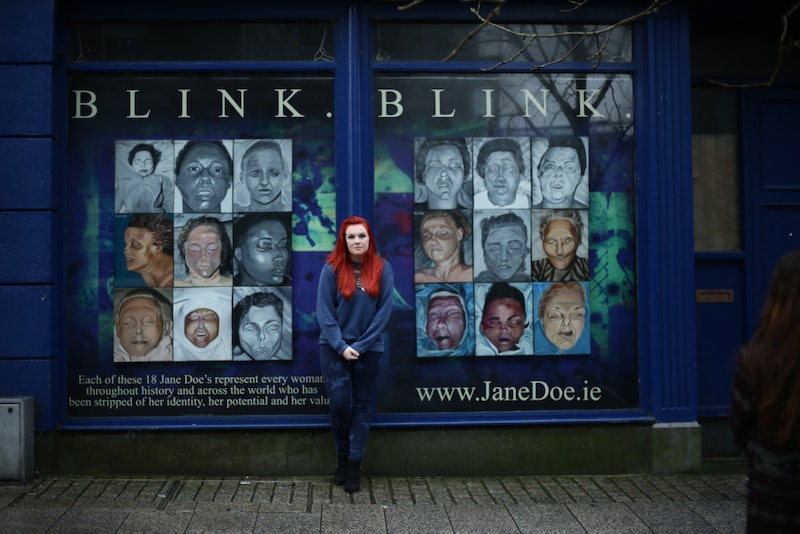 Note: The following piece contains images that may be disturbing to some readers.

It's a sad but true fact that not every murder gets solves, and that not every murder victim is even identified. Which is part of the reason Sarah Honan decided to paint portraits of Jane Does, the name given to unidentified female bodies in the United States, in a series titled "Blink." Because it just doesn't seem right that so many women can go unremembered.

Honan, a 19-year-old artist from Ireland, first started drawing and painting Jane Does in early 2014. She told The Daily Dot that she initially got the idea while drawing a woman on death row. "I thought of all of the victims of sexual and physical abuse, of women deemed disposable by society," she said. "It was only when I discovered the Unidentified Persons Database that I realized how many faces there were to paint and that one simply wouldn't be enough. And of course, who isn't fascinated by issues surrounding identity, death, and the frailty of human connection.”

Because America's Unidentified Persons Database is all public record, as well as available online, Honan was able to find thousands of potential women to depict. And so she started painting. She titled the project "Blink," after a poem she herself wrote about the subject matter. To date, she's painted women from every decade since the 1950s, the portraits done in acrylic and pencil on 16x20 canvasses. They're difficult to look at, which isn't surprising given that they're taken from morgue photos of women who met tragic and violent ends. But Honan says that she feels it's important that these women be remembered honestly.

"I was bleakly honest in my portrayal," she said, "and didn't really 'retouch anything I saw in the photographs."

Here are some examples of the project, though readers should note many may be troubling for some viewers.

Honan has been able to fund the project through crowdfunding from a site called Fund It, where she surpassed her goal. “There was nothing more nerve-wracking than the possibility of no one caring about these women, because that had been the story of their lives and I didn't want to play a part in that," she said. "But then something amazing happened and people really got behind the project.... In such a grim project, it really helped to know that there were others out there who cared.”

You can see her speak more about the project in her video from the fundraiser below. You can also find more portraits and more information about the Jane Does she has painted on her website here.