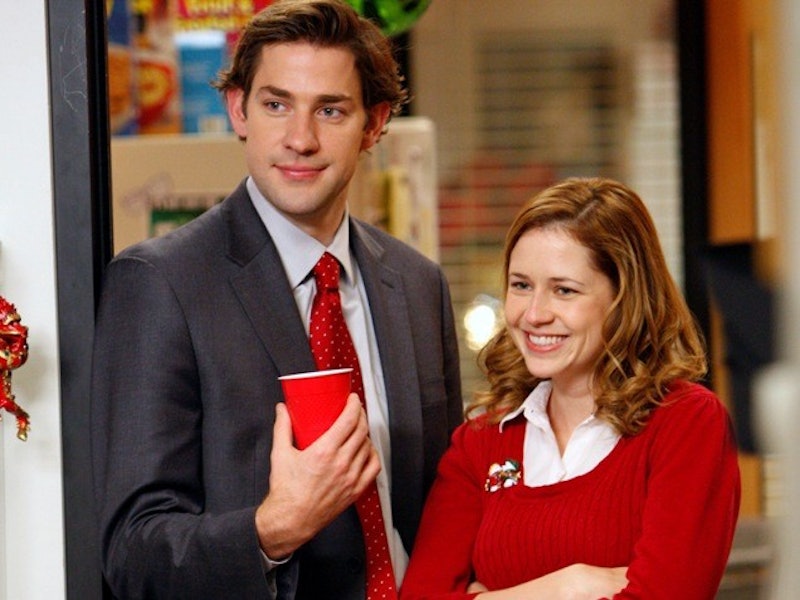 Ten years ago, an eccentric, hilarious, and lovable group of employees who worked for a paper company entered our lives. Before we knew it, these characters became family and changed our lives — for the better. That's right, I'm talking about NBC's The Office . Ever since Michael, Jim, Pam, Dwight, Angela, Oscar, Ryan, Kelly, Andy, Toby, Stanley, Kevin, Phyllis, Meredith, Creed, Darryl, and Erin appeared on the small screen, the Peacock network has never been the same. Well, what better way to celebrate this fantastic workplace comedy than by focusing on one of its most beloved couples, aka Jim Halpert and Pam Beesly.

Despite everyone adoring these two and wishing they were a real-life couple (yes, including me), did you ever realize how much they tormented others at Dunder Mifflin? As much as I hate to say it, but Pam and Jim can be seen as villains. It's pains me to even write those words, but just stick with me. Have you ever thought about all of the prank these two pulled? Even though most of them were well-deserved, their jokes were kind of mean.

Look, Pam and Jim will always be part of my top 10 TV couples, but let's have some fun by analyzing how these two can be seen as the bad guy and woman of the comedy. With that said, here are 12 reasons why Jim and Pam were villains in Scranton, Pennsylvania.

They Pulled Some Mean Pranks

Throughout the entire series, Jim and Pam were the pranksters. No matter who it was (mainly Dwight), the two couldn't resist joking with others. Whether it was convincing Dwight the CIA was recruiting him, instigating Michael, or getting Andy to do ridiculous things, Pam and Jim went above and beyond to torture others.

Do you remember that time Pam brought lice to the office? Do you remember how Meredith took the fall, and Pam let her? Oh, and do you recall how Meredith shaved her head and then had to wear hideous wigs? If that doesn't say villain, I don't know what does.

Jim and Dwight were the dyanmic duo when it came to torturing one another. Yes, Dwight was a pain in the ass and he deserved a lot of what Jim threw at him, but, boy, did Jim prank him — a lot. Whether he was putting his office supplies in jello, slamming Dwight in the face with a door, or framing Dwight for murder, you could say Jim's pranks sometimes went too far.

This was the injury of all injuries. Can you believe Jim and Pam wouldn't rescue Michael after he burned his foot on his George Foreman grill? First, I know, who burns their foot on a grill? Second, yes, Michael acted like a baby afterwards, but they laughed about it and could care less that their boss was in pain. How rude, right?

When Michael took on Pam's mother as his lover, Pam was furious. What made her even more furious was when she discovered that Jim knew and didn't tell her. Yeah, I'd be mad at my husband too.

This was a dinner party for the books. It was horrible. Well, Jim wanted to leave and tried to escape by pretending his apartment flooded. Yep, he was going to abandon Pam! It didn't work out, which means the two had to suffer together. That's karma, Jim.

They Made Their Wedding Guests Wait

Don't get me wrong, Pam and Jim's wedding was super romantic. However, if I would've been a guest, I would've been extremely angry that I had to wait for the bride and groom to show up. Not cool, Jim and Pam. Not cool.

All right, no one wanted Jim to end up with Amy Adams' character, Katy. However, he did not treat her very nice. For example, when they were on the booze cruise, he flat out told Katy that they had no future and it was over. Ouch.

Pam Kind Of Led The Boom Operator On

Ugh. These were the worst and most heartbreaking episodes, ever. When Jim and Pam's relationship was on the rocks, fans were in an uproar. What made it even worse was how close Pam and Brian, aka the boom operator, got. Um, Pam, no.

They Pushed Andy To Punch A Wall

When a prank ends with someone punching their hand through a wall, well, yeah, that prank might have just been a bit too much. That's exactly what happened when Pam and Jim hid Andy's phone in the ceiling and pushed his anger over the edge. Granted, Andy needed anger management, but still.

I hated when Michael was the only one from Dunder Mifflin to show up at Pam's art show. You know it's also bad when Roy and his brother even went, but Jim didn't. How sad is that? Jim, I know you were with Karen and things were awkward with Pam, but don't be a complete jerk.

Yep. Jim totally let Michael fall into the koi pond. There's no way around that being mean and cold.

Even if they can be seen as villains, Pam and Jim will always be the best PB & J to ever exist.