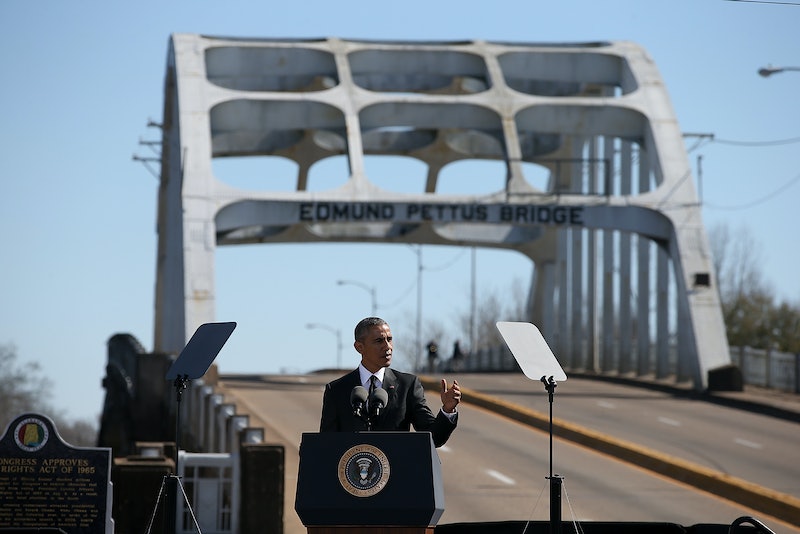 Saturday, March 7, marked the 50th anniversary of Bloody Sunday, the 1965 march from Selma to Montgomery when civil rights protesters were brutally beaten. To commemorate the landmark civil rights moment, President Obama gave a speech at the Edmund Pettus Bridge in Selma, Alabama on Saturday morning. Twitter was buzzing with activity during Obama's speech, as the Twittersphere watched celebrities react to the Selma anniversary tribute.

The march from Selma was a tragic event in history, but one that ultimately contributed to the passage of the Voting Rights Act of 1965. Obama delivered a moving speech commemorating the civil rights protesters who braved the march from Selma, hailing the marchers as heroes whose sacrifice "will reverberate through the ages. Not because the change they won was preordained; not because their victory was complete; but because they proved that nonviolent change is possible; that love and hope can conquer hate."

Following his passionate speech, Obama, accompanied by his family, former President George W. Bush, and one of the original marchers, Rep. John Lewis, crossed the Edmund Pettus Bridge over the Alabama River "to retrace the path of the bloody civil rights march 50 years ago that transformed America."

The response to Obama's commemorative speech to this historic day has been overwhelmingly positive; his treatment of topics ranging from poverty to racism to voting has been highly praised, with many celebrities and notable figures taking to Twitter to commend him and celebrate #Selma50 themselves.

Here are a few celebrity responses commemorating this historic day.