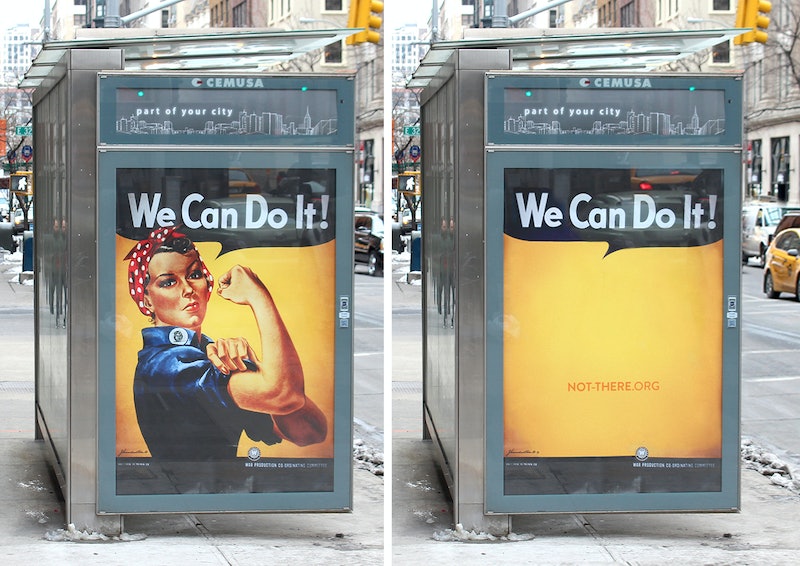 The world needs women to be as present in the public consciousness as men. That’s the message that the Clinton Foundation is making clear today with its International Women's Day "Not There" campaign.

Though the movement for global gender equality has made a lot of progress over the past 20 years, there’s still a long way to go when it comes to providing fair wages, health care, education, and other equal opportunities for women and girls both in the states and abroad. This campaign serves to remind us of the remaining disparity in rights by showing us visually what it would be like if women ceased to participate. This morning, the faces of all females (including celebrities and other known figures) were erased from billboards, major magazines like Vogue , prominent websites, and various social media platforms, and instead were replaced with the URL not-there.org. The symbolic gesture is meant to not only raise awareness that (as the name implies) the world isn’t there yet when it comes to gender equality, but also to force people to question the other places in their lives where women still aren’t present — whether that be in a work office or a political office.

See some examples below, along with some of the campaign's supporters:

The foundation will also follow up today’s campaign with a formal report,“No Ceilings: The Full Participation Project,” which compiles more than 20 years of data on the status of women and girls around the world and will be released on Monday.

“We are taking a collective stand that full participation for women and girls anywhere and everywhere remains the unfinished business of the 21st century,” Clinton Foundation Vice Chair Chelsea Clinton said in a press release. “By knowing the facts and what has worked and hasn't worked to advance gender equality, we can accelerate the pace of change for women and girls — both at home and around the world.”

It’s a crucial message that everyone who believes in women’s rights should pass on. How do you start? You can join the many publications and public figures participating in the Not There campaign by switching the profile photo on your social media accounts to the default blank silhouette, or by visiting notthere.org.