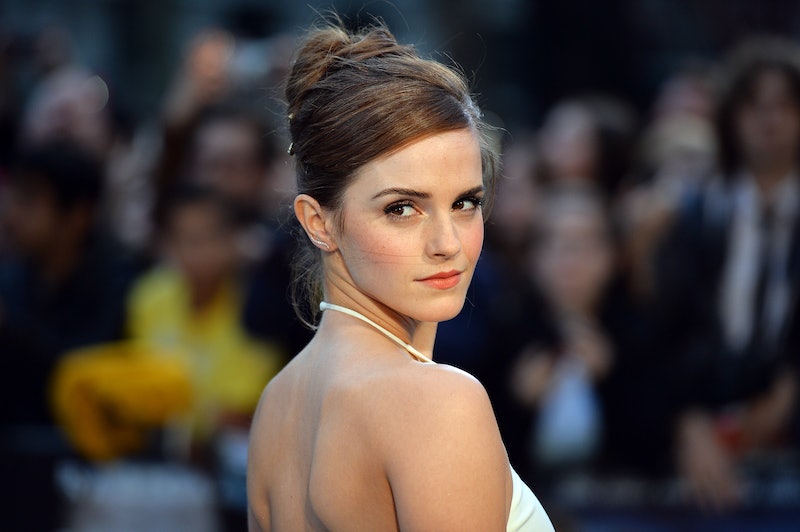 When it comes to leaving the world speechless and utterly enchanted in her wake, Emma Watson is no newbie. The actress has stolen our hearts since her early Harry Potter days, taking roles that are both complex and inspiring, becoming quite the fashionista, and most importantly, establishing herself as a passionate advocate for gender equality. So it goes without saying that Emma Watson's HeForShe Q&A session in honor of International Women's Day left us totally impressed.

In September 2014, the UN Women Goodwill Ambassador gave a speech that quickly took over the Internet, as part of the launch of the #HeForShe campaign. The movement, as described on the #HeForShe Facebook page, is the "solidarity movement for gender equality bringing together one half of humanity in support of the other half of humanity, for the benefit of all." The goal is to put an end to the misconception that feminism is about "man-hating" and not elevating half of the population to the level of respect that they have always deserved. Women are not the only ones fighting this fight. This movement has showcased how many men are in favor of gender equality. And today, March 8, in honor of International Women's Day, Emma Watson led a live Q&A session on her Facebook page addressing questions from fans, bringing to light important issues that continue to affect women today. Emma's answers, as always, were dead on — but the questions that were asked are equally as important. Here are six questions from this session that should really be asked more often.

1. What was the mission statement you wanted to get across?

How often do we really get to examine the personal efforts of successful women to raise awareness around causes they support? So often during interviews, women are asked about their clothes, relationships, and whether or not motherhood is in their future. It wasn't until Watson answered this question in such detail about her speech in September and the cause that she's so passionately fighting for that I realized how very rarely women get to answer a question like this.

2. Why do you think people are reluctant to use the term feminism?

To which Watson brilliantly replied, "I think people associate it with hate, with man-hate. And that's really negative. And I don't think that's what feminism is about at all. I think it's actually something incredibly positive."

3. What are the next things you're working on?

This question is crucial because any woman working to support a cause doesn't just attend one event and then her work is over. It's ongoing and it's a struggle, but one that is absolutely worth facing. Watson said that only 200,000 men have signed the HeForShe petition, so she will be continuing to reach more men and getting them to sign.

4. Who were the people that inspired you?

Watson says she was inspired by the strength and resilience of her mother, who was a single and working parent. This needs to be asked more often because any person in the world who has affected major change has done so through willpower and being inspired by someone else. Inspiration has a trickle-down effect, and anyone in a position of power was inspired to get there by someone who did so before them. We all need heroes, and Watson is forever ours.

5. What were the things that happened growing up that you can now see were unfair?

Women face inequality and lack of fairness in major situations and in everyday moments. Probably so often that we have stopped noticing some of them. Pointing to specific moments of inequality is key for people of both genders to recognize that we do indeed still have a problem that needs solving.

Watson responded to this question by saying, "I've been incredibly lucky, and I've been very supported. But I think it starts really young with boys and girls being told what they have to be. And it can just be really damaging."

The HeForShe movement celebrates the freedom for both men and women to be as sensitive and as strong as they desire to be. The interviewer brought this up as he is a sensitive man, a self-proclaimed "softie" who felt pressure as a teenage boy to exhibit only manly behaviors. This admission is something that needs to happen more often, so that young men see that the pressure they experience to be a certain way is nothing but bullsh**, and that expressing emotion is what makes us human, rather than one gender versus another.

More like this
5 Ways To Stand In Solidarity With Women In America From The UK
By Sophie McEvoy
How To Fight For Reproductive Rights, Based On How Much Time You Have
By Courtney Young
Megan Barton-Hanson On Bi-Visibility & The Need For LGBTQ+ Love Island
By Sam Ramsden
Jujubee’s Humble Reminder
By Sam Ramsden
Get Even More From Bustle — Sign Up For The Newsletter