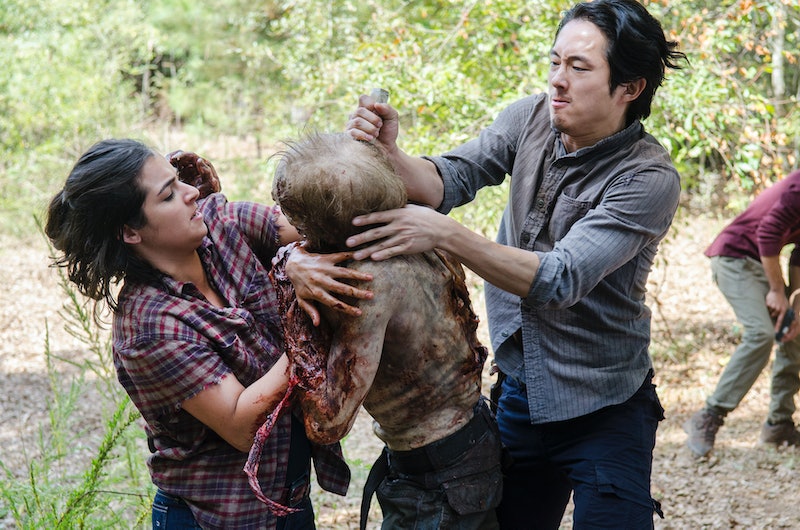 This season of The Walking Dead has been all about the markings. The path to Terminus was marked until Rick edited it to be a warning, and Morgan appeared to be following a series of markings in trees. In Sunday night's episode, the group came across a walker with a "W" on his forehead. What does "W" mean on The Walking Dead? Who would go through all the trouble to mark a zombie's head... and then not kill that zombie? Something fishy is going on here.

Is this in any way related to the red "A" that Jessie's son stamped onto Rick's hand at Deanna's party? Presumably, that stands for Alexandria. However, comparisons to The Scarlet Letter (or at least Easy A) are unavoidable. But for now, let's focus on what that W could stand for.

That's the most obvious one, right? It may seem a little redundant to mark a Walker with a W. Perhaps this was part of a ritual. Perhaps, in the early days of the epidemic before it became clear that everyone was infected and would become a zombie upon death, the bitten dead or dying were marked. On the other hand, is "walker" a universal term for these creatures? It seems like different groups have different names for them.

There's a theory roaming around that the next group to show up on The Walking Dead is called the Wolves, and that could be who is marking these zombies. Are the Wolves a rival gang of survivors, like the Scavengers or Negan and the Saviors? Or are they, as the folks at Uproxx put together, Rick Grimes' own team? In that case, are the markings a type of warning to them? Spooky.

I've wondered before if The Walking Dead was using the Hobo Code, an old practice of carving symbols into trees and whatever was around to inform fellow travelers about different threats. There is a symbol in the hobo code that looks a little bit like this marking, and it means "barking dog." There doesn't seem to be a connection there, but you never know.