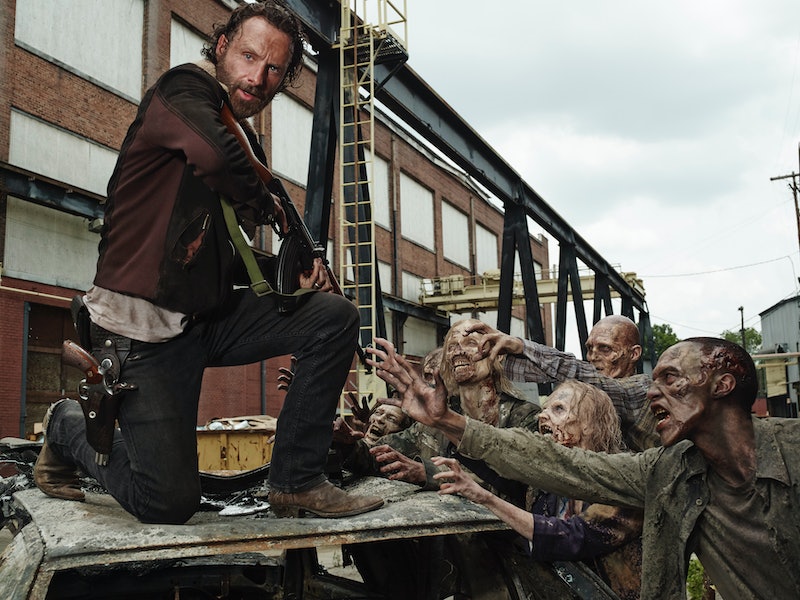 We've all been waiting for the next big bad to reveal him or herself in the new episodes of The Walking Dead. But have you ever stopped to think that maybe our heroes are the antagonists now? Could Rick take over Alexandria on The Walking Dead ? When the group arrived at the Alexandria Safe-Zone, they were struck by how weak the residents seemed to be in their comfortable living situation. With a show like The Walking Dead, you'd expect there to be something more sinister than skeletons in the closet. However, the walled Virginian suburb seems relatively nonthreatening. The leader of the Alexandria Safe-Zone, Deanna Monroe, is no Dawn or Governor, and the Safe-Zone is no Terminus. The potential for evil that we've seen there lies in the individuals.

What is the ROTC guy Aiden Monroe's hazing-esque "ritual" that he does before supply runs? Where is Enid sneaking off to beyond the wall? Who is Jessie's husband and why is he so shady? These characters are ones to watch, but it's small potatoes compared to what the main group has encountered.

Last week, Rick & Co. had an existential crisis when forced to compare themselves to the walkers. Maybe that was a red herring and they really will start turning to the dark side. When the group met Father Gabriel in the first half of the season, Rick stressed that he must have done something because all of them had. Even the cannibals of Terminus were no match for Rick Grimes' rage. The group has the skills and maybe enough time and drive to start taking over. Here's why we should all be taking Rick's threat seriously.

Last week, Rick and Michonne were made Constable of the Alexandria Safe-Zone. This is something we have to take seriously, no matter how ridiculous and antiquated the title may be. Constables are not just the villains in period musicals anymore!

In the promo for next week's episode "Forget," Rick tells Michonne that he doesn't know if this is "some kind of play, handing authority to strangers," with a smirk that makes you think he's already planning two or three steps ahead.

It Happens In The Comics

In the comics, Rick does take over the Alexandria Safe-Zone after they survive an attack and former Congressman Douglass Monroe resigns. Deanna is the stand-in for Doug on the AMC series. However, I have to say that I doubt power is just going to relinquish itself. That's just not very good television.

What's All This About The "Wolves"?

Keen fans of The Walking Dead have noticed a new visual trend in these latest episode — wolves. I tip my sheriff hat to Dustin Rowles over at Uproxx for figuring out that the wolves on Walking Dead might be Rick's gang. They've compared themselves to a pack. They are looking to take over Alexandria. Is this ominous warning and wolfish imagery telling us that there are people in the world who already fear Rick Grimes and his gang? It's a fascinating theory and one I would be really excited to see play out.