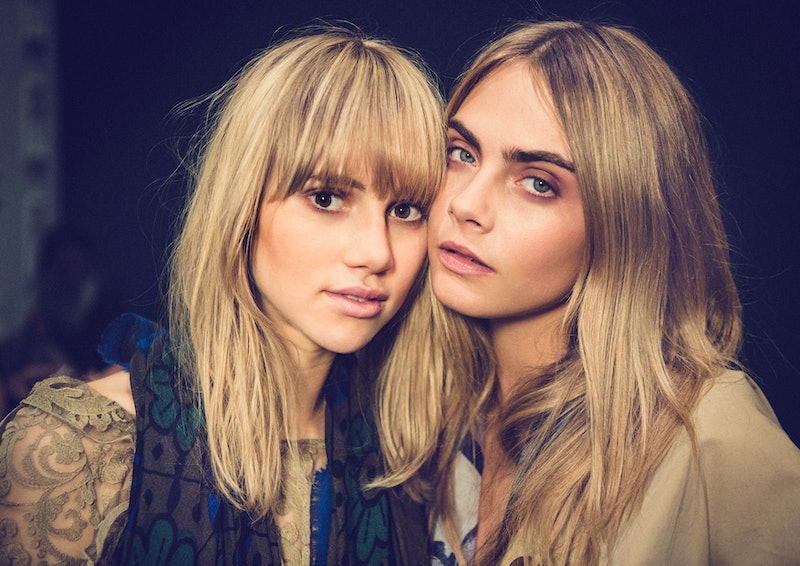 OMFG. The April 2015 cover of Vogue UK is about to blow your damn mind. Cara Delevingne, Suki Waterhouse, and Georgia May Jagger cover Vogue UK, draped in clingy, gold, blue, and mermaid-like ensembles, respectively. Delevingne, the most internationally famous of the three, finds herself smack dab in the middle of a gorgeous (and very compact) Jagger x Waterhouse sandwich. Obviously, each single member of this trio is gorgeous with her own unique physical traits and could command her own solo cover now or later, but putting the Brit "It" Girls of the modeling world together pretty much equals a powerhouse cover...

... sort of like how Anna Wintour and American Vogue chose to double up and align those beautiful besties Taylor Swift and Karlie Kloss for their shared March 2015 issue. There is power in numbers and there is a subtle feminist touch that comes from pairing, as opposed to a division, famous females. Both the singer and the model are/were each worthy of her own U.S. Vogue cover, but it was more fun when they were combined. Not to mention it was a massive fashion culture event, too.

That issue weighs like six pounds, BTW, thanks to all the ads and editorial. But still, Swift x Kloss made the style bible feel so relatable with their all-American style.

Look at how show-stoppingly beautiful Jagger, Delevingne, and Waterhouse are. Their brows are on fleek, for sure. The strong brow trend is not going away.

Here are the three most likely reasons Vogue UK put these three English roses together instead of giving them each a solo cover now or at a different time during the year.

Delevingne and Jagger have both fronted Vogue on their own prior, but this is Waterhouse's debut cover. She isn't quite as famous as her cover peers and while the celeb intelligentsia knows she is dating Bradley Cooper, she is not quite as globally recognizable... yet.

That said, she is gorgeous and her star is on the rise, so why she may not be ready for her own cover today, she still gets the boost from pairing with Delevingne and Jagger. She also reminds us that Vogue can and will still champion a soon-to-be superstar.

There's something so empowering about spotlighting positive female friendships and relationships in the often cutthroat world of fashion and celebrity. I love seeing the ladies aligned, as opposed to trying to take one another out. It's refreshing to see women support and love each other, as opposed to competing or acting like frenemies.

3. Vogue UK Had To Answer The Swift x Kloss Cover

I know I just celebrated the empowering nature of non-competitive female friendships, but a little friendly competition between international editions of a fashion mag is way OK. The UK version of Vogue could not be outdone by the now-infamous Swift x Kloss U.S. cover. Jagger, Delevingne, and Waterhouse are pretty much the British equivalent of these two ladies, so their cover, the internal images, and the feature are a satisfying and beautiful answer.