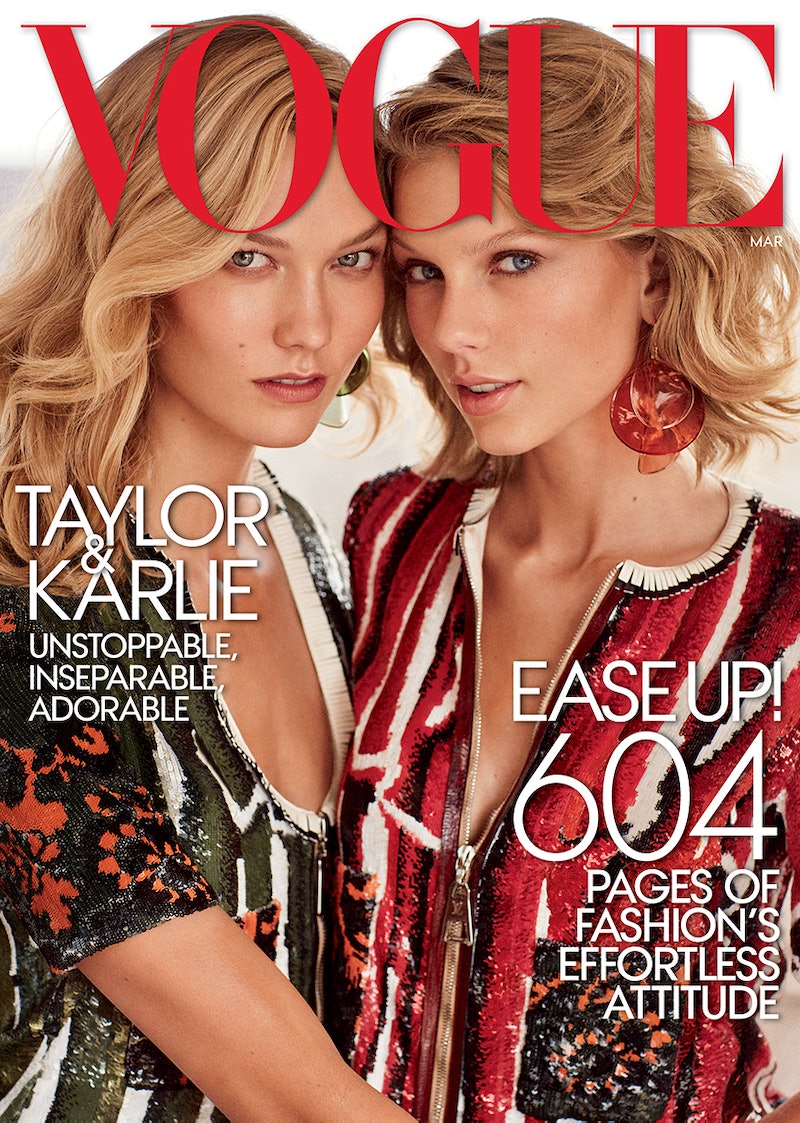 Taylor Swift is having a moment, and it's one that's been a long time coming. On Friday, she debuted her newest music video for "Style" on Good Morning America, her sexiest and most grown-up video yet. It's just another success from her album 1989. But even though T. Swift is the girl of the moment with all eyes on her, she still always makes time for her girlfriends. In fact, Taylor Swift and her BFF Karlie Kloss cover the March issue of Vogue, which includes a spread recreating their real-life road trip to Big Sur.

The two have only known each other for a little over a year — the singer and model were introduced by mutual friend Victoria's Secret model Lily Aldridge — and were attached at the hip from the get-go. Months later, and well into their friendship, while hanging out at a post-Oscars party, they decided to take a spontaneous road trip to dreamy Big Sur, California.

The Vogue profile of Kloss and Swift's mutual love is surprisingly relatable. Their friendship sounds A LOT like my favorite BFF-ships, and I'm sure plenty of other ladies can relate.

In the interview, which took place at Swift's New York apartment, the singer talked about finally getting fed-up with constantly being scrutinized and picked apart for her love-life. She decided last year to put an end to dating for a while, and instead spent time making new friends and keeping the old. In fact, Swift is pretty notorious for killing 'em with kindness, and she's transformed a lot of haters into some of her closest friends, including Lorde who once dissed Swift by calling her too perfect.

At the Grammys, Swift shot down a sexist remark from a reporter who insinuated she was gonna go home from the show with a bunch of men, to which she replied: "I’m not going to walk home with any men tonight. I’m going to go hang out with my friends, and then I go home to the cats." Cats + Friends = Better than a man, any day. Since T. Swift has the whole friends thing down, here are seven very relatable things about her friendship with Kloss we learned in the Vogue profile:

Eating's Always Better With Your BFFs

Swift apparently loves to bake cookies and make meals for her pals, and I totally feel her on that one. My mama taught me that if you love somebody, the best way to show them is to feed them good eats and good treats until they burst. Kloss and Swift recently had a pasta night which also included teen girl hero, Tavi Gevinson. Plus, your BFFs are usually down to call it quits if the meal you're making is failing and to just order takeout.

You're Never Too Old for a BFF Slumber Party

Swift loves a low-key hang, and she does it right. She apparently has a "collection of old-timey nightgowns that she and her friends wear while watching television and — technology aside — pretending they’re living in frontier days." Now, my BFFs and I don't rock vintage nightgowns, but we DO like to chill in our bathrobes and do a LUSH face mask while re-watching Parks and Rec (featuring another great female friendship of our time, Leslie Knope and Ann Perkins).

Are We BFFs, Or Are We Dancers?

We all know Swift loves to dance and she ain't afraid to show it, and it looks like she's always having the best time in the room. It's no wonder that she and her friends have a ton of impromptu dance parties in her kitchen. I personally love to dance like an idiot to old Beyoncé tracks with my best friends. Beyoncé songs can be substituted by mostly anything; it's more the horrible moves that lead to the bonding.

You Both Always Text Back Immediately

Another one of Swift's great friends Lena Dunham told Vogue that no matter how busy Swift is, she texts back no matter what if a friend's in need. My BFF and I are constantly communicating through texts, because there are a lot of dog gifs and emojis that I need to send her. More than that, though, if she's at work having a tough time, I'm there to tell her her boss is a tyrant. Also, if they don't text back ASAP, I worry they've been Taken.

There's No Better Co-Pilot Than Your BFF

Sure, you could TRY to go on a road trip with your significant other, but that's dangerous territory. You're much better off hitting the road with your BFF like Swift and Kloss. Because your BFF will never judge you if the only car snack you want to eat is Flaming Hot Cheetos, or when you want to stop and take selfies with every weird attraction on the side of the road.

According to Kloss, she and Swift have been spending so much time together that they've started dressing eerily alike. "The other night I came over, and we were both going someplace from here, and we were both wearing black crop tops and high-waisted skirts. It’s kind of getting weird." Who hasn't started subconsciously dressing like their BFF, always matching at least slightly when you're about to go out together somewhere? I guess that's par for the course when you already go shopping together and share each other's closets. Oh well! Two is always better than one.

You can see all the rest of the beautiful BFF photos over at Vogue.